When Alice was going full bore, she was a wonder to behold.

On good days, the behemoth tunnel-boring machine could eat through more than 10 metres of rock and soil, carving a perfectly round channel 24 feet in diameter. As she gorged forward, Alice simultaneously affixed rounded concrete slabs to the walls, erecting a cement tunnel through which Montreal’s REM light-rail system will one day shuttle passengers to Pierre Elliott Trudeau International Airport.

She was the first tunnel-boring machine of her kind to be used in Quebec, her 430-tonne bulk transported from the Robbins plant in Ohio to Montreal aboard 60 trucks.

“She’s like a mobile industrial plant, tunnelling and constructing walls at the same time,” Marc-André Lefebvre, head of communications for NouvLR, the engineering and construction partnership building the Réseau Express Métropolitan, said during a site tour Wednesday. Officials won’t disclose the cost of the machine, saying it’s proprietary information.

Unfortunately for Alice, when tunnelling began in October 2020 there were few good days to be had. The first 350 metres were “terrible,” Lefebvre said. Unstable soil conditions at the start of the dig, with a mix of clay, rock, soil, water and air pockets, led to cave-ins that clogged the machine and stopped its rotating cutting head from carving a path.

The entrance of the tunnel starts in the Technoparc Montréal industrial zone located north of the airport, in part to protect the ecologically rich wetlands that exist there. But swampy conditions led to difficult digging, and conservationists say the tunnelling may have also led to Heron’s Marsh in the wetlands drying out in the summer of 2021. CDPQ Infra, the subsidiary of the Caisse de dépôt et placement du Québec responsible for the REM site, and Quebec’s environment ministry dispute those claims, saying that while digging did create two sinkholes, a lack of rain was to blame for the drying out of the marsh. CDPQ Infra replaced plants swallowed by the sinkholes and added water to the site.

Below ground, engineers came up with a solution. They injected liquid nitrogen at a temperature of minus -196 Celsius, to freeze the earth, stopping the cave-ins and allowing the cutting discs to break and excavate the earth.

Montreal’s boring machine was named after Alice Evelyn Wilson (1881-1964), a scientist and the first female geologist with Geological Survey of Canada. (The consortium building the REM turned to the public to choose a name, but wisely reserved veto power, thus avoiding the indignity foisted upon Britain’s $375-million polar research naval vessel that the public voted to name “Boaty McBoatface.” It was eventually named “Sir David Attenborough.”)

Alice has 47 disc cutters that can exert 25 tonnes of pressure to cut through the bedrock and limestone, propelled by 19 pistons that are eight metres long and nearly a metre in diameter. Rock, dirt and sludge is collected by the front rotating cutter head and moved onto a conveyor belt and out of the tunnel.

As the machine digs, prefabricated panels built at a concrete factory erected at the Technoparc are affixed to the wall, seven slabs bolted to each other to form a ring 1.7 metres wide. In total, 10,115 slabs were used to build 1,445 concrete rings, creating a tunnel 2.5 kilometres long. Electricity and other utility cables will run along the bottom of the tunnel, and the rails of the train will be placed above them.

A crew of 28 working 12-hour shifts along with a further support crew of 10 engineers accompanied Alice, ensuring the cutter could run 24 hours a day. After one-and-a-half years, it finally made its way under the wetlands, the runways and the airport itself to the underground area where the REM station will be built in the airport’s basement level.

The station is not expected to be finished before the end of 2024. The train connecting to the airport won’t run until 2025, CDPQ Infra said.

And as for Alice? She finished her Montreal work in mid-July. Now she’s being dismantled, her used up components will be discarded and workable parts will be used in new tunnel machines, forging connections elsewhere in the world.

To see a video of tunnel-boring machines at work, visit the Robbins company website at www.robbinstbm.com/ and click on the “Products” link, then the “Tunnel Boring Machines” link. Alice is an “Earth Pressure Balance” tunnel boring machine. 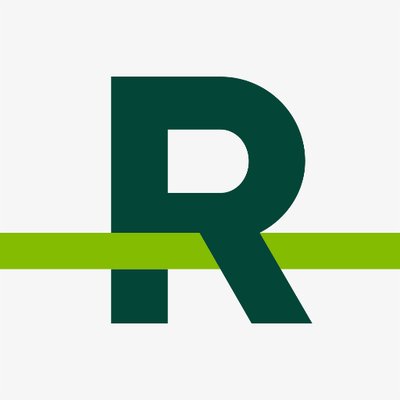 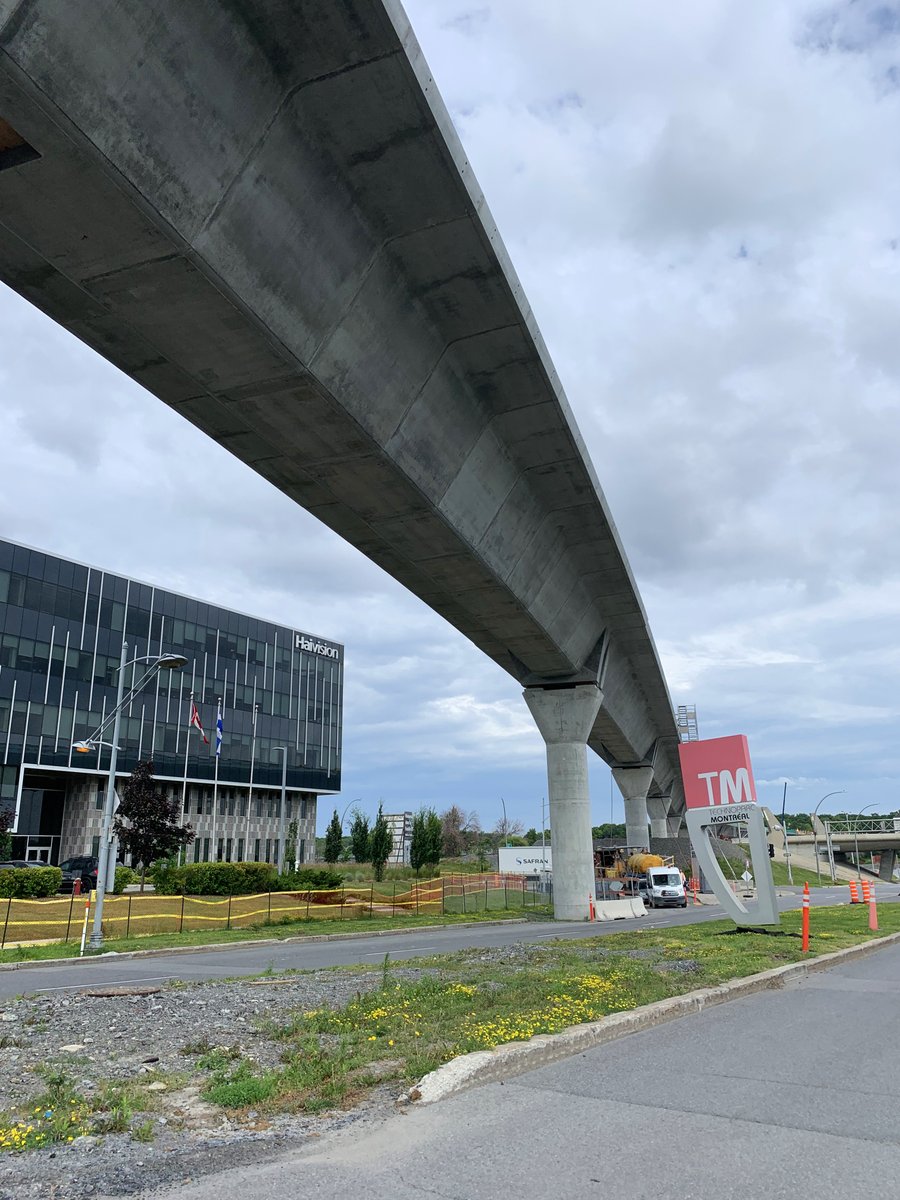 It’s just attached to the concrete base: 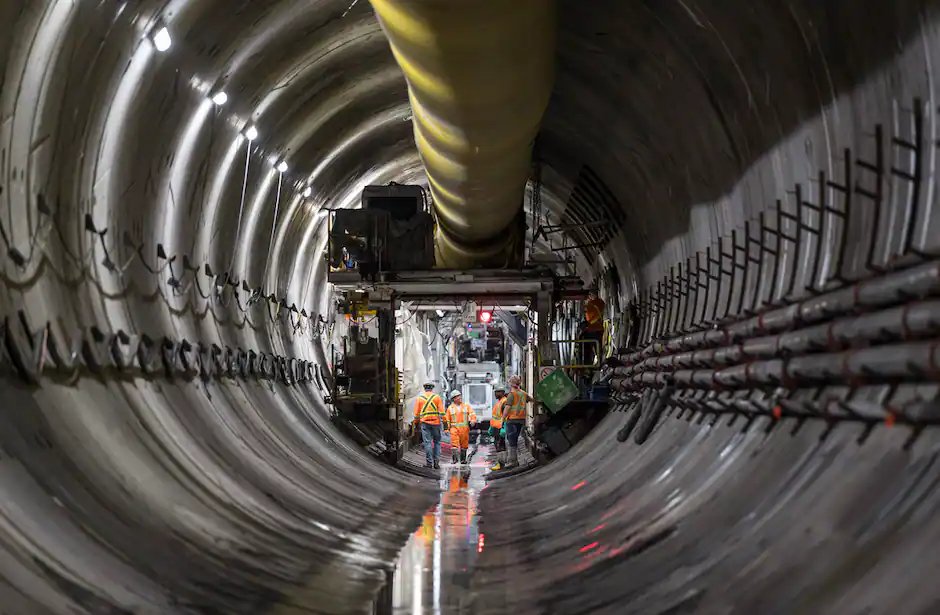 @AeconGroupInc
The 2.5-km #reseauexpressmetropolitain tunnel to the Montreal-Trudeau Airport is now complete! Next up are the tracks & the electric system located 35m underground. We’re #AeconProud to be a part of #transformingtransit in Montreal. Credit #NouvLR #REM https://t.co/VuJ8oNosKM 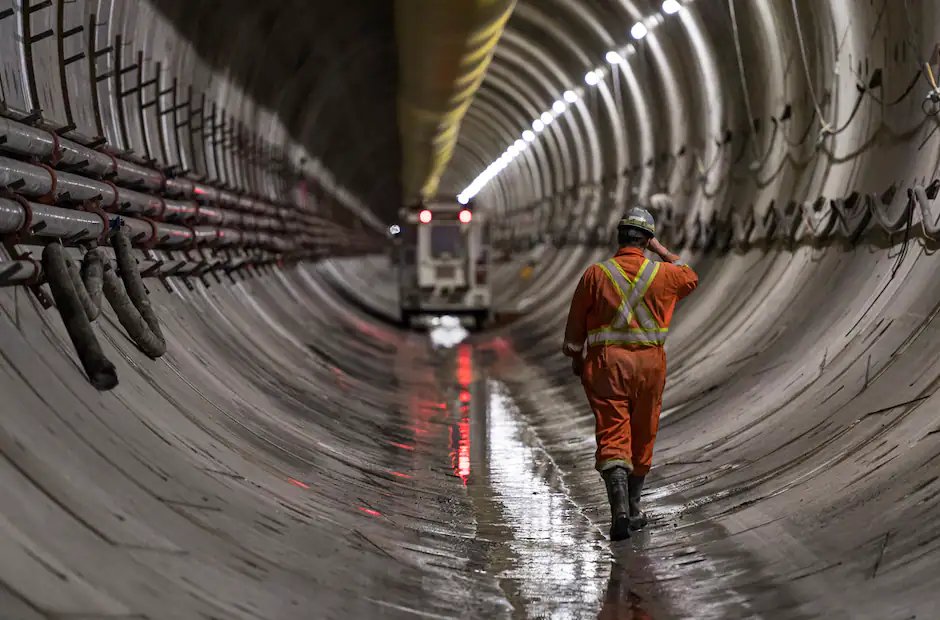 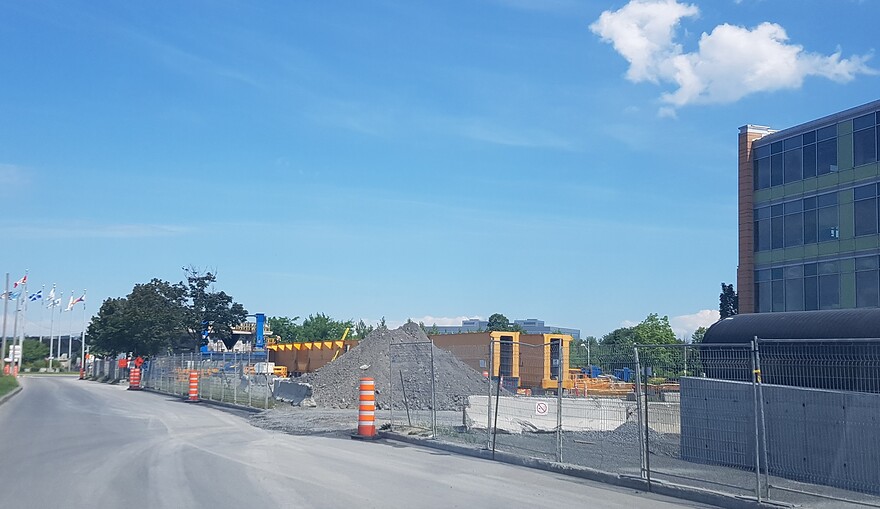 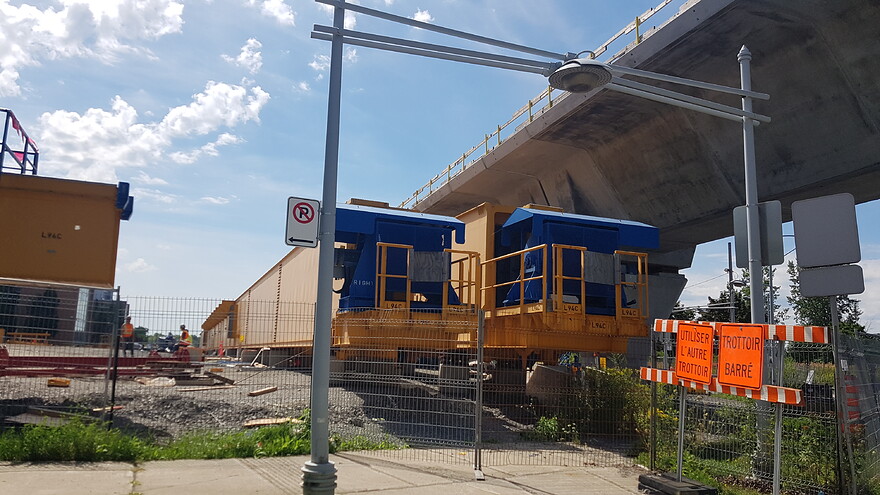 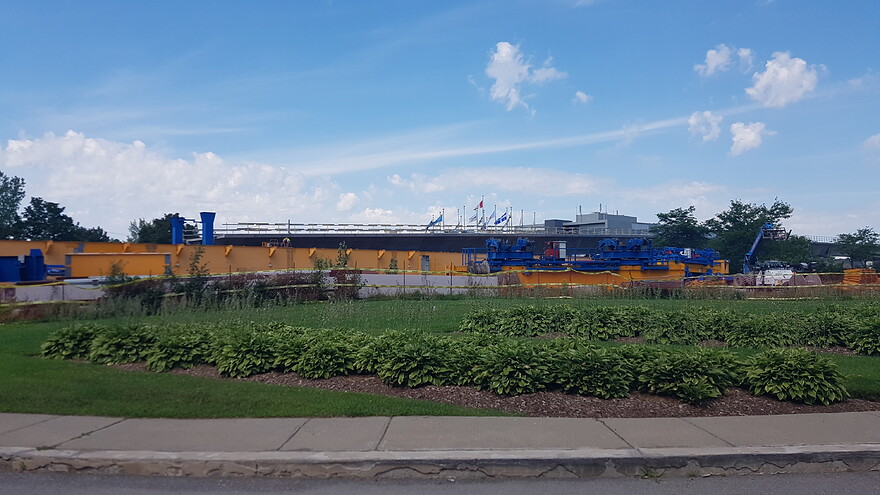 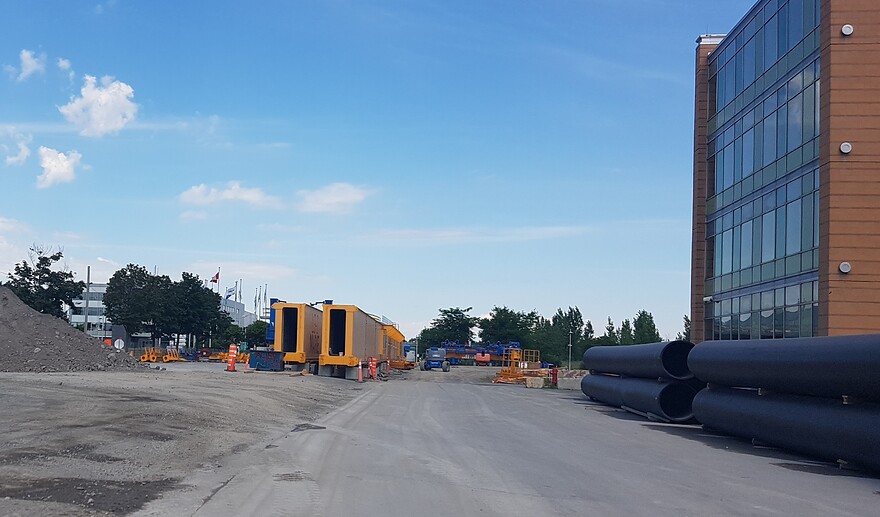 I was talking about the lanceur de poutres, I need that for school x)

Over your head hehe 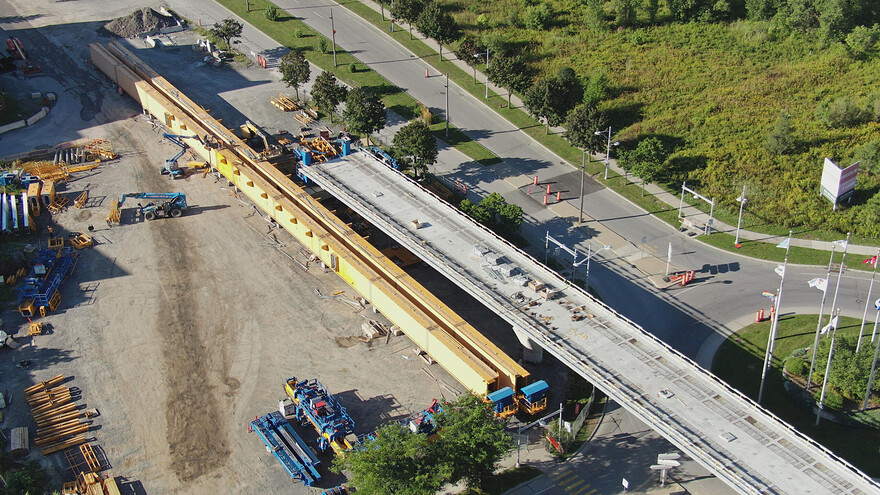 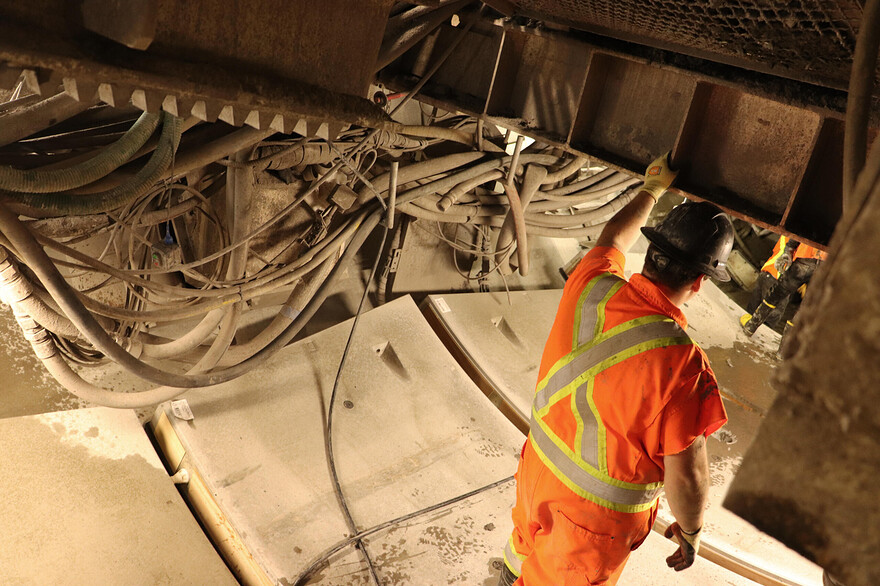 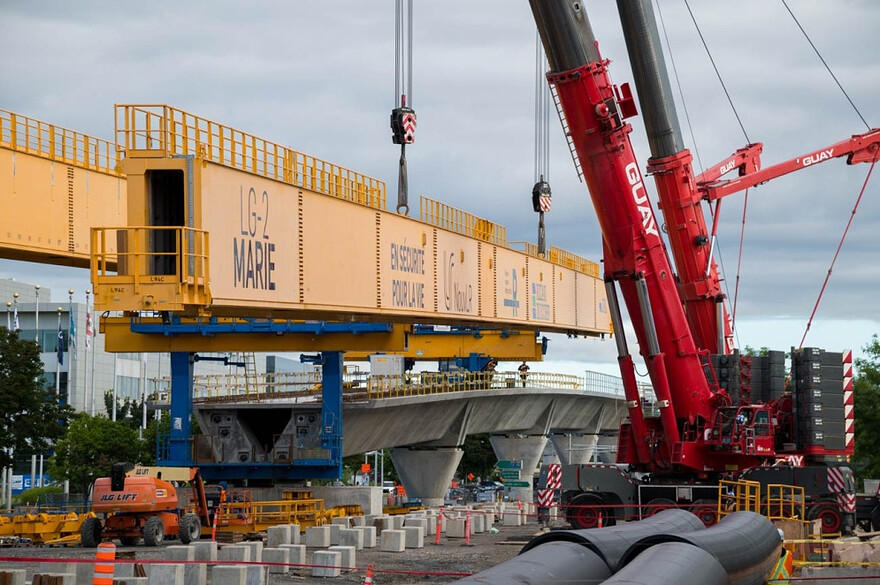 I was talking about the lanceur de poutres, I need that for school x)