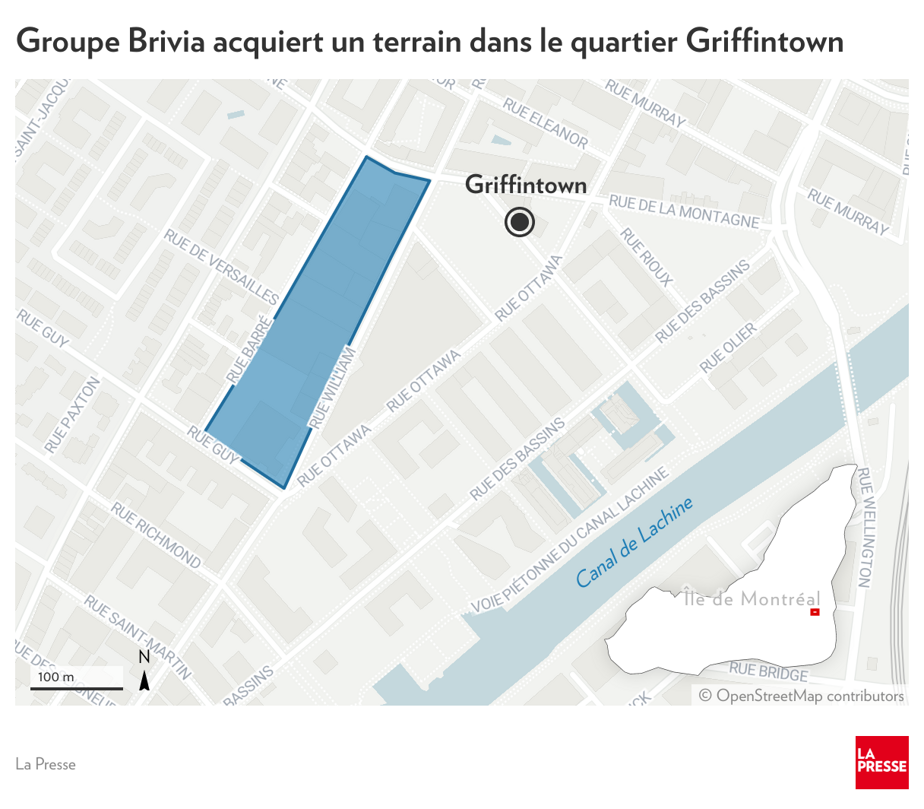 Whatever’s going up ain’t going to be small. What makes me happy about this project is that it shows there is still heavy demand to build in this part of downtown. Some developers said the market is dead, there is no demand and then BOOM a 300,000 sq ft lot is bought. Really eager to see what project will be built here. 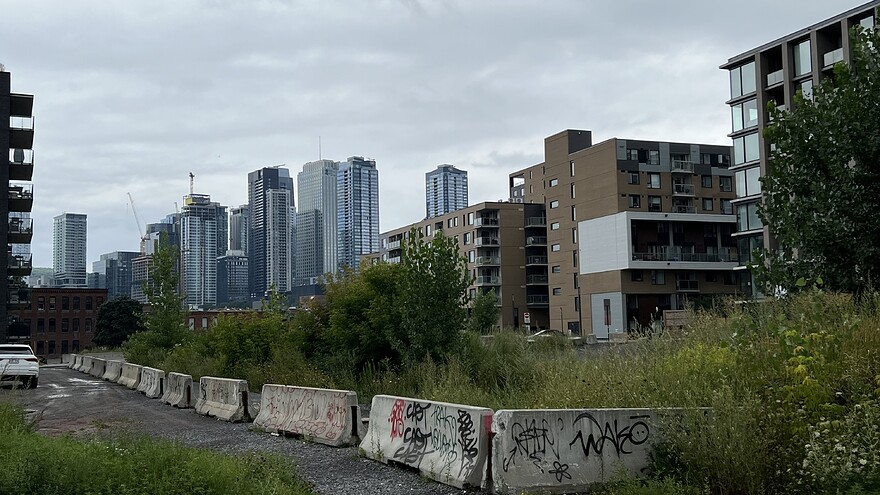 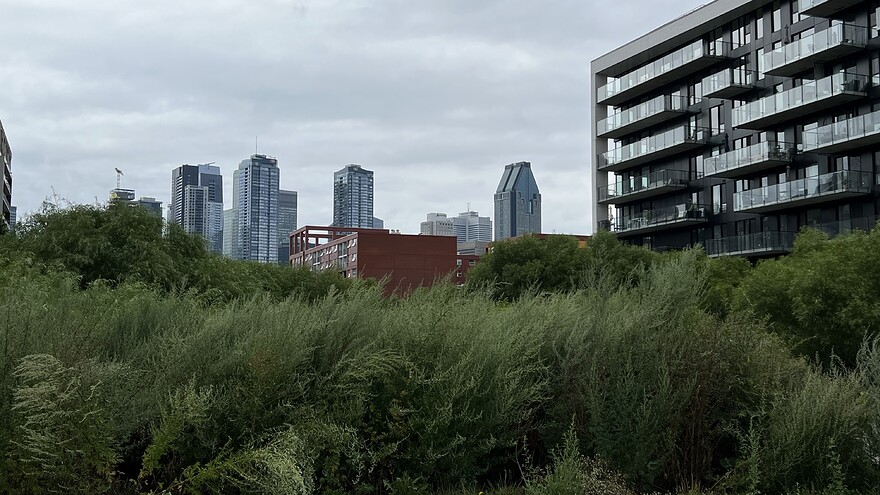 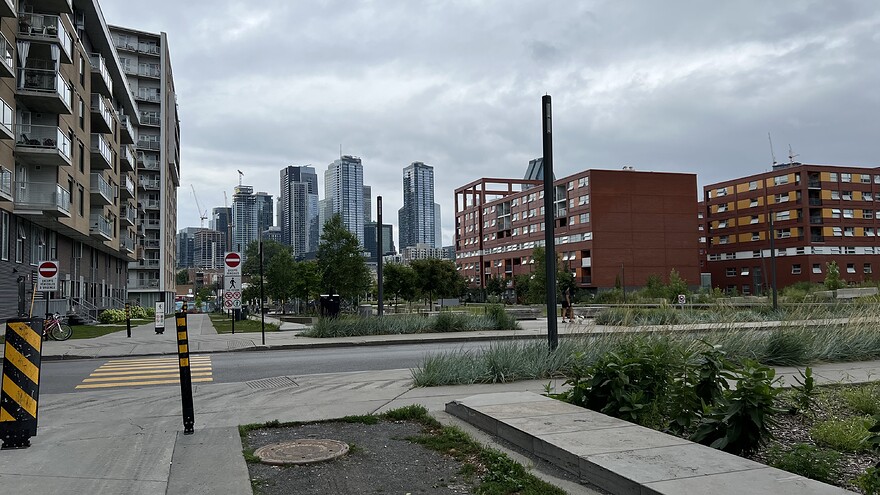 Brivia Group is partnering with Olymbec to develop a mixed-use project on a 300,000-square-foot site in Montreal’s Griffintown neighbourhood just south of downtown.

The multi-phase development will be one of Brivia’s largest projects. It will cover the quadrilateral known as Ilot de la Montagne formed by the Guy, de la Montagne, William and Barré Streets.

“It’s one of the rare single lots of this size that is available in Griffintown,” said Vincent Kou, chief development and investment officer at Brivia.

Part of the site was previously slated for a residential project known as Legado, which included residential towers of 10 to 12 storeys, “but we’re in the works of doing something different,” Kou said.

“We have our own vision of what we want and we’re still working with the city on that to come up with a quality, forward-looking project that takes account of what is really needed in the Griffintown area, including commercial diversity and green space, really a forward-looking vision for that area,” he said.

Founded in 2000, Brivia has more than 20 projects in its portfolio, including 1 Square Phillips, Mansfield Condos, YUL and QuinzeCent in Montreal.

Montreal-based Olymbec was formed in 1975 and owns and manages a diverse portfolio of industrial, office, retail and residential properties located throughout North America. The company says it is one of the largest private industrial real estate holders in Eastern Canada.

Kou hopes the development can get underway in mid-2023, pending city approval. Brivia tries to complete its developments “as soon as possible” after its land acquisitions are closed, Kou noted.

The project will likely take five to six years to complete, depending on market conditions.

While plans for the development have not been finalized, it will include a mix of condos and rental units.

“The site and the project are big enough to ensure we have both rentals and condos responding to the market and the community’s needs,” Kou said.

Given its proximity to downtown Montreal, Kou expects the residential component to attract young professionals and young families. It is also subject to the City of Montreal’s 20-20-20 bylaw, which requires new residential developments to contain 20 per cent social housing, 20 per cent affordable housing and 20 per cent family housing.

The project will also include institutional and commercial components and green spaces.

Kou says Brivia is partnering with Olymbec because “they’re very big players and this is a big project. With all of the phases together, this is going to be one of the biggest projects undertaken by Brivia.

“We want to partner with quality partners like Olymbec with strong experience in real estate.”

Brivia will be taking care of the development, Kou said. He added ]they are “very, very happy to have a partner of the calibre of Olymbec joining us to develop this site.”

Some of the industrial buildings on the site, primarily dating to the 1940s, have already been demolished and the remainder will be demolished to make way for the project. A large parking lot is used by the security firm GardaWorld, the main tenant on the site.

Given the site’s proximity to Notre Dame and de la Montagne Streets, Lachine Canal and the upcoming Griffintown-Bernard Landry REM light-rail train station, “we basically see a lot of potential to create and build a good quality living space for the community in this area with great potential to create something different,” Kou said.

Among Brivia’s other upcoming projects is Stirlyng, a condo development at 2028 Peel St. in downtown Montreal, near de Maisonneuve Boulevard.

It will include 159 high-end condo units and will be next to Devimco’s MAA Condos development. Stirlyng is slated for occupancy in 2024.

In Laval, Brivia plans to build a multiresidential/commercial project of 1,250 units with supplementary retail and services to be built on more than 600,000 square feet of land at Saint-Martin Boulevard and Bois-de-Boulogne Avenue.

Brivia is awaiting approval from Laval, but hopes it can announce the first phase this fall, Kou says. “I’m confident that (for) the area fronting on Saint-Martin we should be able to progress significantly on our approvals process with the City of Laval.”

In downtown Vancouver, Brivia hopes to launch sales this fall for its Curv residential development now that the project has received final approval. Curv, at 1075 Nelson St., will be the world’s tallest Passive House building, according to Brivia.

The developer is teaming up with Henson Development to build an energy-efficient, 60-storey tower which will contain condos, market rental units and social housing units.

Brivia Group is partnering with Olymbec to develop a mixed-use project on a 300,000-square-foot site in Montreal’s Griffintown neighbourhood just south of downtown. The multi-phase development will be one of Brivia’s largest projects. It will cover...