Dorval mayor remains hopeful some type of link will be built between the airport REM and VIA Rail train station. Alice, the name given to the Réseau express métropolitain’s giant tunnel boring machine, is now boring a 3.5-kilometre underground passage from the Technoparc in St-Laurent to the future REM station beneath Montreal-Trudeau International Airport in Dorval. REM

It’s crunch time for a decision on a REM extension in Dorval.

With Alice, the name given to the Réseau express métropolitain’s giant tunnel boring machine (TBM), now boring a 3.5-kilometre underground passage from the Technoparc in St-Laurent to the REM station beneath Montreal-Trudeau International Airport, Dorval Mayor Edgar Rouleau is still awaiting word on a possible 700-metre extension to the nearby VIA Rail station.

“No news, yet, on the extension,” said Rouleau, who has pushed for an extension that would benefit commuters travelling to and from the West Island on the future 26-station REM light-rail network.

The current REM plan calls for the light-rail line to end at the airport, but Rouleau has always maintained it’s a “no brainer” to extend the line to the train station, which serves as an intermodal transportation hub for VIA Rail, Exo commuter trains and nearby STM bus terminal along Highway 20.

The Dorval mayor says an extension a bit further south would hook up train and bus passengers, as well as motorists looking for an alternative mode of transport. The idea has garnered support from different levels of government and the Aéroports de Montréal, but Rouleau has yet to hear a final decision.

Nevertheless, the Dorval mayor remains hopeful some type of link will be built between the airport and the VIA train station.

“I’m very confident there will be a link between the airport and the gare intermodale. What type of link or transportation, the feds will show us what it will be,” he said.

“Will it be the REM, or will it be over-ground (mono-rail)? I don’ know but it’s too much of a no-brainer to say, ‘No, there will not be a link’ when everybody agrees, especially the Aéroports de Montréal. That’s where we are at the moment.

“Now that we know Alice has started tunnelling, then it’s time for us to put the pressure on the feds and province to tell us what are we going to do and where are you guys going? If it’s aboveground, then let’s come out and say it and start working on the design.”

Rouleau said adding another underground station would be his first choice because it will allow commuters to board the REM without having to make another transport switch at the airport. He is worried commuters will prefer driving their cars downtown if they must travel to Dorval, then board a shuttle of some kind to the airport, where they could then board the REM.

“Are people going to be ready to do that switch? That’s hard to define. The less change you have to do is the best thing. That’s really the point for me.”

The Aéroports de Montréal is also seeking federal government financing to build the airport station, which could cost an estimated $600 million

The airport station is being privately funded by ADM, but the COVID-19 pandemic has turned Pierre Elliott Trudeau International Airport into a ghost town.

Last year,the city of Dorval unveiled an independent study it had commissioned that found that a REM extension just one stop beyond the REM‘s planned airport station would bring an additional 3,600 passengers to the REM on a daily basis.

According to the study by Trajectoire Québec, a new intermodal station, linked with the Via Rail, EXO commuter train service and adjacent ATM bus terminal, would provide access to the REM for 40,000 transit users who pass through the area on a daily basis. The study also found that a REM extension would also ease congestion in the Dorval Circle used by an estimated 150,000 drivers per day.

Rouleau said building an underground REM station would cost more than an above-ground link, but added it would be short-sighted to build the REM without an extension, considering the tunnel boring machine is already in the ground.

“Two hundred million dollars looks like a big (number), but in a hundred years, it’s nothing,” he said. “They won’t regret building it.

“Don’t forget, we build infrastructure for 100 years. Look at the métro, it’s over 50 years old.” 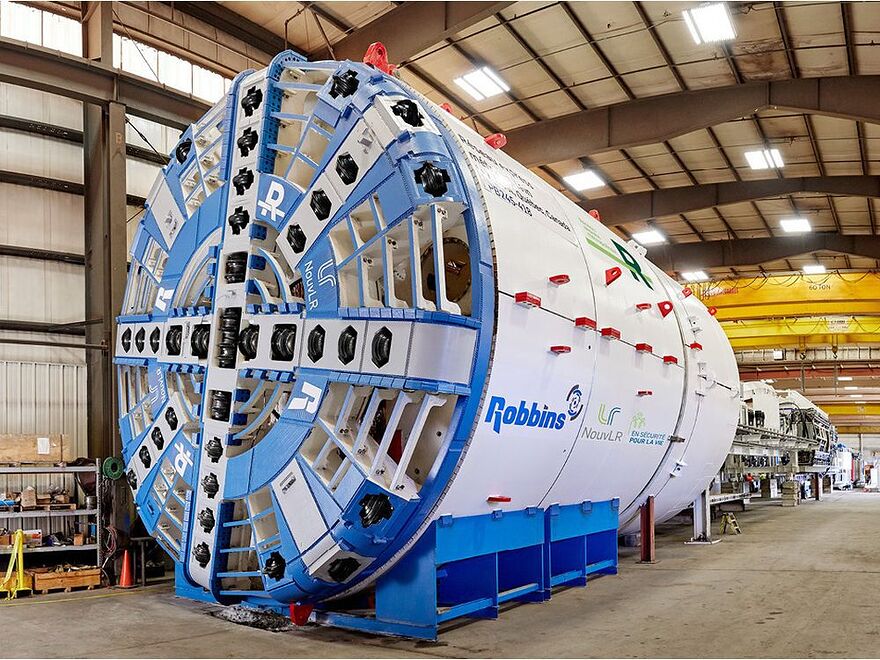 If exo1 doesn’t get improved at all, the more-direct trip downtown (and relatively quick time to get there) from Dorval won’t make up for its lack of adequate frequency. I’d suspect that more people from the Lakeshore would choose REM during off-peak hours. I don’t think this extra load would affect the main trunk much.

SameGuy said: If exo1 doesn’t get improved at all, the more-direct trip downtown (and relatively quick time to get there) from Dorval won’t make up for its lack of adequate frequency. I’d suspect that more people from the Lakeshore would choose REM during off-peak hours. I don’t think this extra load would affect the main trunk much.

The Vaudreuil-Hudson line, from Gare Dorval to Lucien-L’Allier, is a 30-minute ride (schedule from Google Maps) + a 5 to 10-minute walk to go downtown. According to rem.info, the REM takes less time than exo1. Airport to Gare Centrale takes 26 minutes + some 2 minutes for the extension to Gare Dorval. When the study talks about an additional 3600 passengers on a daily basis, there is nothing to doubt that most of the amount covers peak hours.Nonetheless, we tend to believe that the REM can absorb another load of passengers like this one. Because it would be also very practical to transit users from Dorval and the surroundings. They would get access to most of the island in less time than our actual network.It’s good to see there’s still (a last) hope for the tunnel boring machine to path its way to Gare Dorval and the bus terminal. 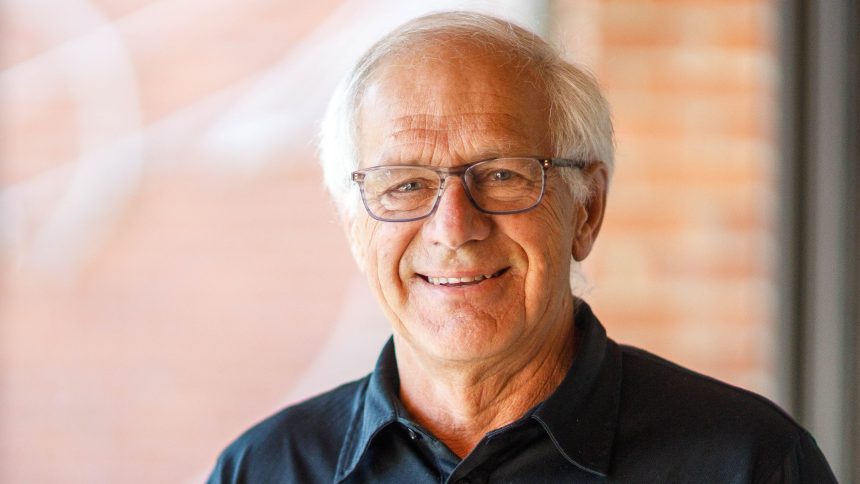 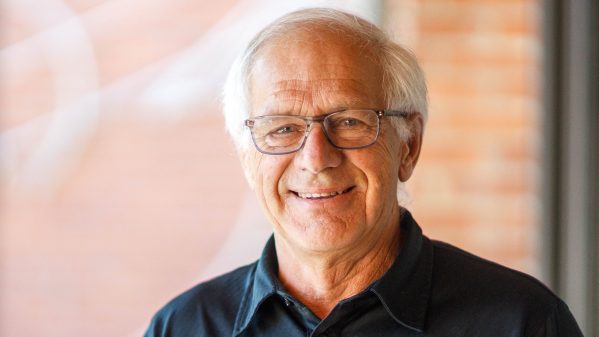 Because it involves the airport and the Class 1 mainlines and VIA, my guess is it would be a predominantly federal project. Either way, I seriously hope the MTQ has zero to do with it! Station will probably be built before the MTQ stops scratching their asses in the Dorval Circle!

I still dont understand why this section was not in the main REM A project. Not only it is a no brainer section but it will bring cash to CPDQi, especially knowing that the aeroport for the next few years will be under capacity due to the pandemic. There are many dorvalians that will surely take this transit if done on time and properly (meaning a station even with only 1 rail).

With two tracks at the Aéroport station, a single track at this terminus would be adequate with the proposed frequencies.

Dorval mayor frustrated with lack of progress on REM extension

“The provincial government does not think of the West Island,” says Dorval Mayor Edgar Rouleau who is still waiting word on REM extension. 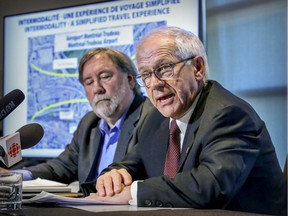 Dorval mayor Edgar Rouleau, right, accompanied by François Pépin of Trajectoire, a public transit users advocacy group, at a press conference in Dorval in 2019 at which time he urged the parties responsible to extend the REM from Trudeau Airport to the Dorval train station transit hub. PHOTO BY JOHN MAHONEY /Montreal Gazette

But Rouleau admits he’s getting frustrated waiting for the provincial federal governments to work out an agreement to extend the REM another 700 metres to link it with Dorval’s intermodal transportation hub for VIA Rail, Exo commuter trains and nearby STM bus terminal along Highway 20

“Now we’re left with 700 metres to go,” he said. “I’m hopeful but also frustrated with the delay it takes for the provincial and federal governments to make a decision.”

Last week the federal and provincial governments announced $500-million in funding to the help the cash-strapped Aéroports de Montréal build an underground REM station at the airport. The ADM, which has seen its revenues sharply decline during the pandemic, will cover the rest.

“In a way, I’m happy (for the ADM), but I’m not surprised because both our governments did not really have a choice in getting some type of financing to help the ADM,” Rouleau said.

“Look, the REM would not be in the West Island if not for the airport. Ask the Caisse de dépôt if they would have gotten involved into a REM in the West Island without the airport? You’re talking about 100,000 (users) from let’s say Pointe-Claire and Dorval to Ste-Anne-de-Bellevue. Do you think it justifies the investment you have there? Absolutely not. You need the airport.”

Although there was no definitive statement about an extension last week, provincial transport minister Chantal Rouleau said any such funding would fall to the federal government, a statement which disappointed Rouleau.

The mayor said he was surprised the transport minister “does not understand how the “gare intermodale (functions) because it is not only federal. VIA Rail is federal, but VIA Rail is only one part of the gare intermodale. The EXO trains and STM are provincial.”

“The provincial government does not think of the West Island,” added the Dorval mayor.

Mayor Rouleau has been pushing for an extension for several years, arguing that linking the REM with train and bus passengers is a “no brainer” because it would encourage more motorists to travel downtown on the 26-station REM light-rail network. He said the idea itself enjoys support from almost every level of government and transportation agencies, including the ADM.

In 2018, the city of Dorval commissioned an independent study by Trajectoire Québec that found an extension to the REM would bring an additional 3,600 passengers to the light-trail network on a daily basis.

According to the study a new intermodal station, linked with the Via Rail, EXO commuter train service and adjacent ATM bus terminal, would provide access to the REM for 40,000 transit users who pass through the area on a daily basis. The study also found that a REM extension would also ease congestion in the Dorval Circle used by an estimated 150,000 drivers per day.

Construction of the airport REM station is to be completed by 2024. 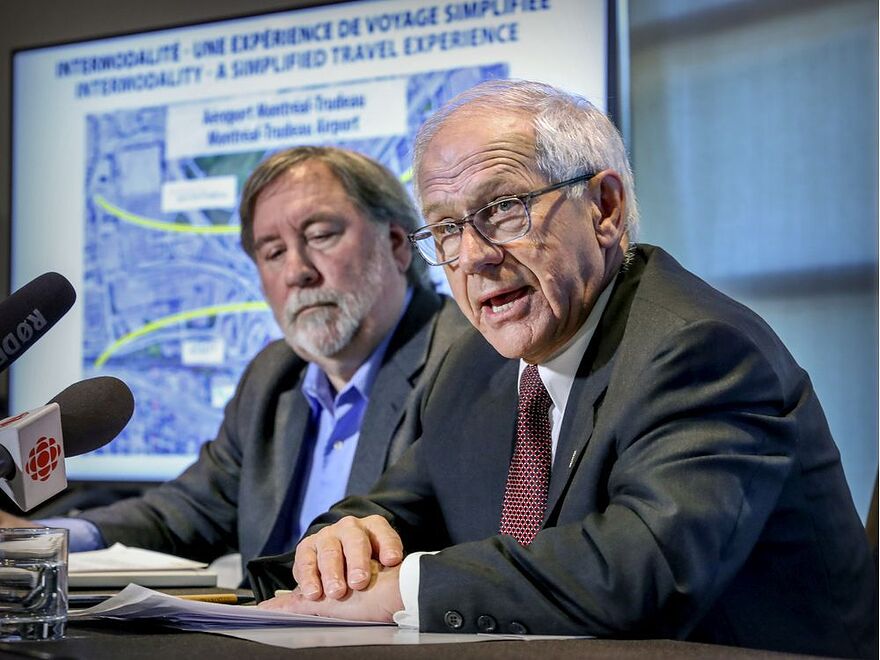 Dorval mayor frustrated with lack of progress on REM extension

Correct me if I’m wrong, but this appears to be the first time any MNA has made a very strong assertion in the Assemblée to push the transport minister into taking a position, and the first time Bonnardel has actually stated this position on the Assembly’s record during Question Period.

I think that it is a first. And it’s filmed on tape…

Does anyone has an update on the study report, asked by the ex-Federal Minister of Transport (Marc Garneau)… in July 2019. 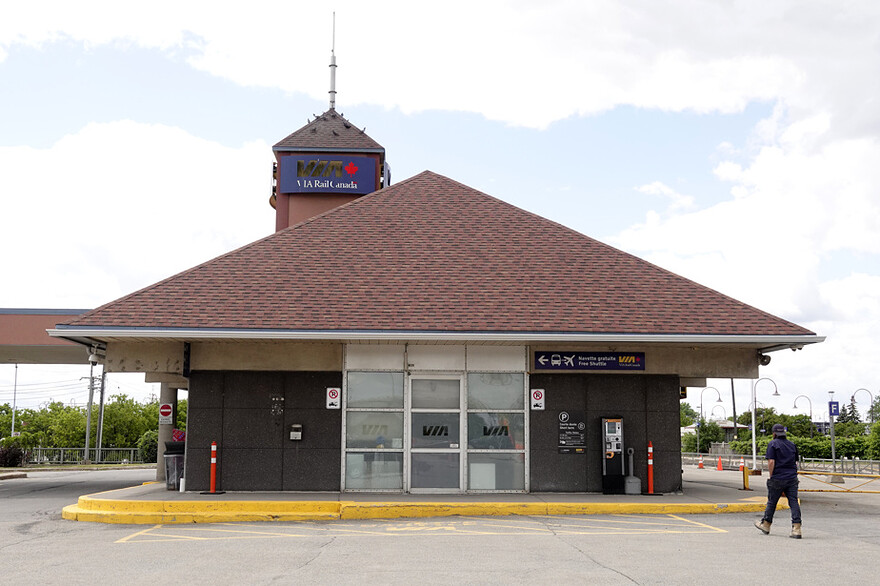