Domaine PÉKULIARI, is the brain-child of Montreal firefighter Karim Zaghbani Cloutier, who owns 320 acres on the edge of Namur.

Author of the article: 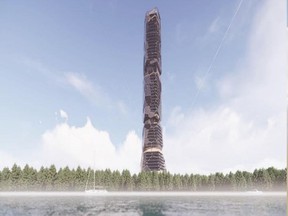 Domaine PÉKULIARI, an innovative housing project proposal, would see a 54-storey tower about two kilometres from the centre of Namur. PHOTO BY ARCHITECTURAL RENDERING COURTESY OF DOMAINE PEKULIARI, MU ARCHITECTURE

NAMUR, Que. — In the heart of this Québéçois village, things grew in a reassuring pattern from 1870, the important functions steps from each other, knit together to make a place whole.

The church, the cemetery, the village hall, the post office, the main public park and the little lake around which hardy souls built modest houses, heated with wood stoves — all within a stone’s throw.
Nestled in hills about 35 kilometres north of Montebello, it is so wedded to the forest that its welcome cabin off Highway 323 is striking for a giant dancing axe.

The mayor, Gilbert Dardel, is a farmer, on council so long (42 years) that he says he came with the furniture, making him, too, a walking business directory.

“We have two gas stations, one dépanneur, one grocery store, two or three restaurants, a hairdresser, a couple of other things,” he said, later mentioning a medium-sized sawmill.

Thus his reaction about 15 months ago when a proposal arrived for a 54-storey tower about two kilometres from the centre of Namur, in the middle of a forest, reaching 670 feet into the sky, easily the tallest building west of Montreal.

”My first impression was, tabernouche, I never thought a building like that would ever come to Namur,” he said one day last week. “I thoughtthis is maybe off the charts, that’s for sure.”

The highrise, called Domaine PÉKULIARI, is the brain-child of a Montreal firefighter, Karim Zaghbani Cloutier, who owns 320 acres on the edge of the village. He went public with the totem-like design at a public meeting in November. While he was, by most accounts, politely received, some thought the idea plain crazy. Social media was filled with mockery, an anti-PÉKULIARI site cropped up on Facebook, and at least one op-ed wondered if it was all a bad joke.

A 54-storey highrise in a village of 600 that has no municipal water supply or sewage system?

Cloutier says he’s selling a concept, a first in North America. The tower would be environmentally “self-sustaining,” with photo voltaic glass that would generate electricity, a system to gather rain water and snow for treatment and reuse, and the latest technology to turn sewage into clean water.

Residents would enjoy the 300 acres as their own nature reserve and feed from vegetable gardens on the grounds. He also planned a 20-to-30-room hotel on the lower floors and permanent employment for roughly 150. The rest would be condos — some taking up an entire floor — and there were whispers of prices in the $8-million range.

“Everyone is entitled to their own opinion and I respect every single view,” Cloutier added. “But I think PÉKULIARI will change the way developers think not just in Canada, but around the world.” 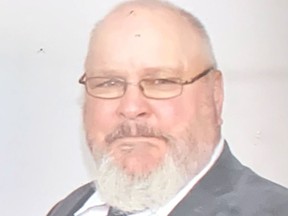 ‘My first impression was, tabernouche, I never thought a building like that would ever come to Namur,’ said Namur Mayor Gilbert Dardel. PHOTO BY FILES /Files

He thinks there are enough die-hard environmentalists out there who simply want to live in nature, reducing their footprint on the Earth, and not requiring a host of luxury services (which Namur lacks) to keep them happy.

“We absolutely need to rethink the way we occupy the land, especially the wild ones, the untouched ones.”

Cloutier, who admits he has never done a project of this size, nor does he have the $300 million in financing locked up, was originally thinking of a plan for 150 individual homes or cottages. But building in a conventional way would eat up about 100 acres in roads and infrastructure, so he was seized with the idea of building up, not out.

“It’s not only a tower inside of a forest, it’s a fully integrated ecosystem.”

The mayor, meanwhile, is trying to keep an open mind. He guesses the public meeting was about 50/50 on the proposal, which will require significant zoning changes from Namur and the area’s regional government. There are also the promised jobs to consider. 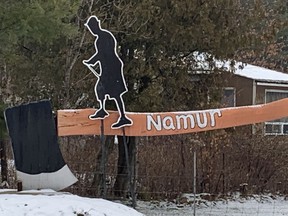 A giant axe at the main intersection greets visitors to Namur. PHOTO BY KELLY EGAN /Postmedia

“That question was asked many times,” the mayor said. “Why Namur?”

We spoke to several people in the village and the younger ones in particular thought Cloutier should be given a shot at succeeding.

Jonathan Prévost, 37, owns Station Namur and is doing a bustling business with his gas station and associated store, which sells everything from booze year-round to fast food in the summer. He has all kinds of expansion plans as the store is a prime rest-stop between Ottawa and Mont-Tremblant.

“I think it would be great for the village, the area, the region,” said Prévost, who was busy tending a fire for the adjacent trail-riders. “I know it’s challenging for some people to understand a big change like that.”

But he pointed out that any big innovation is often met with resistance. “I think the concept is awesome.”

Dani Chenier lived in Namur for 15 years and her husband has business interests there going back three generations. She called the project “audacious” and “interesting,” but thought the context was wrong. 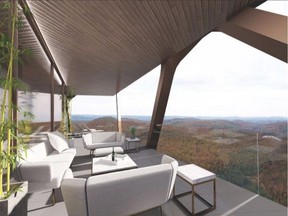 The Domaine PÉKULIARI plan would include condos — some taking up an entire floor. PHOTO BY ARCHITECTURAL RENDERING COURTESY OF DOMAINE PEKULIARI, MU ARCHITECTURE

“It looks like it should be in Laval or Dubai, or Kuala Lumpur.” She also rents out a home in the village for seasonal use and says the winter is a tough sell, which speaks to the viability of a 30-room hotel in Namur in winter or summer, it being 45 kilometres from Mont-Tremblant (a place loaded with services and activities).

“You come down an elevator, come outside and there’s nothing to do. All you have is scrub brush.”

But the whole point, Cloutier counters, is essentially to commune with nature in the middle of nowhere.

“You want to reconnect with Mother Nature,” he said. “There’s no need, say, for racing carts on the property.”

The mayor promises more public meetings on the proposal, probably in 2021. 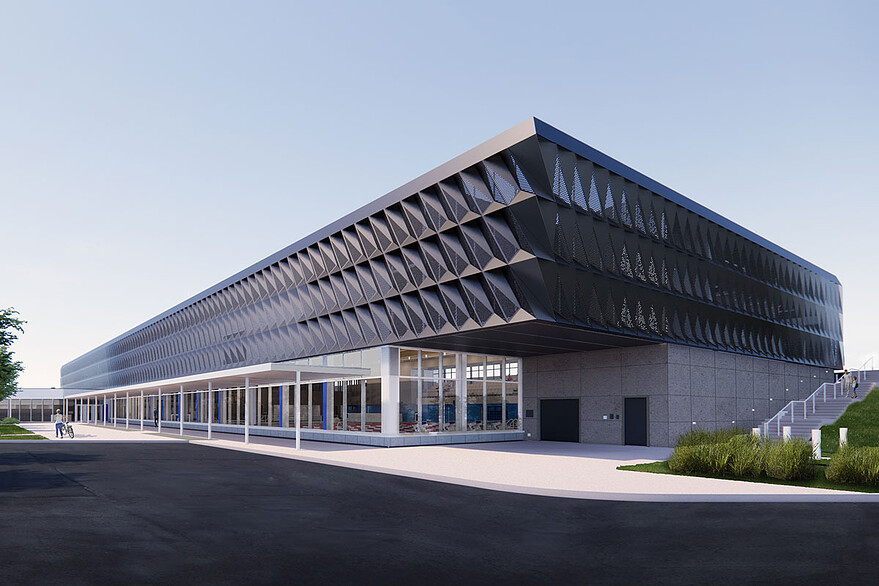 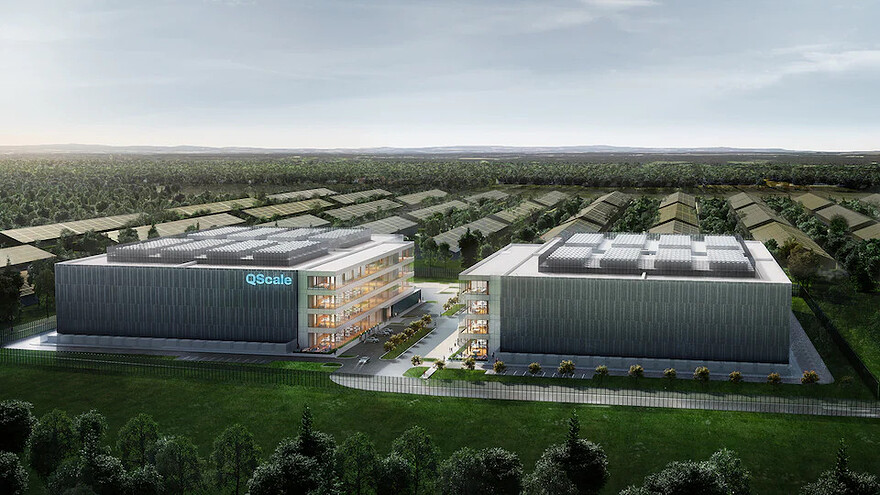 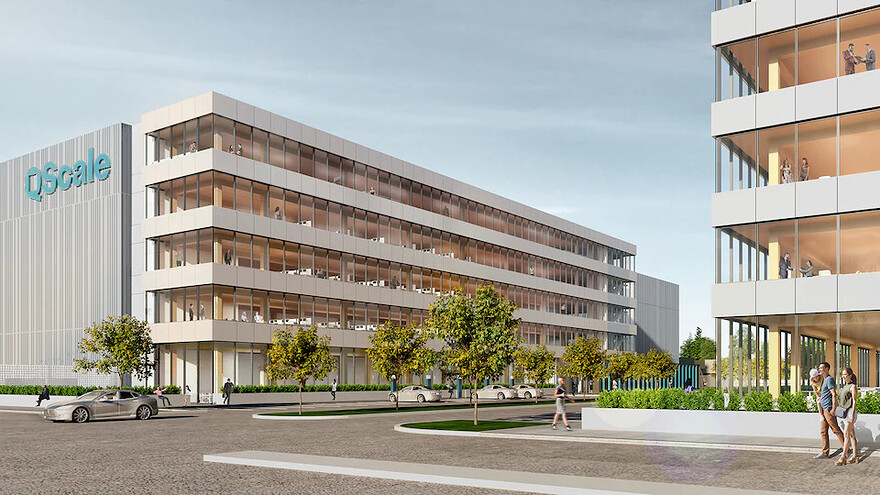 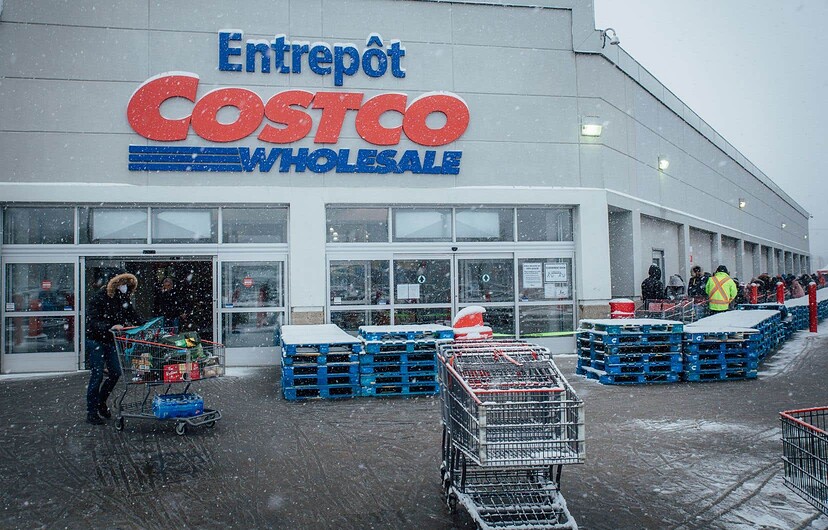 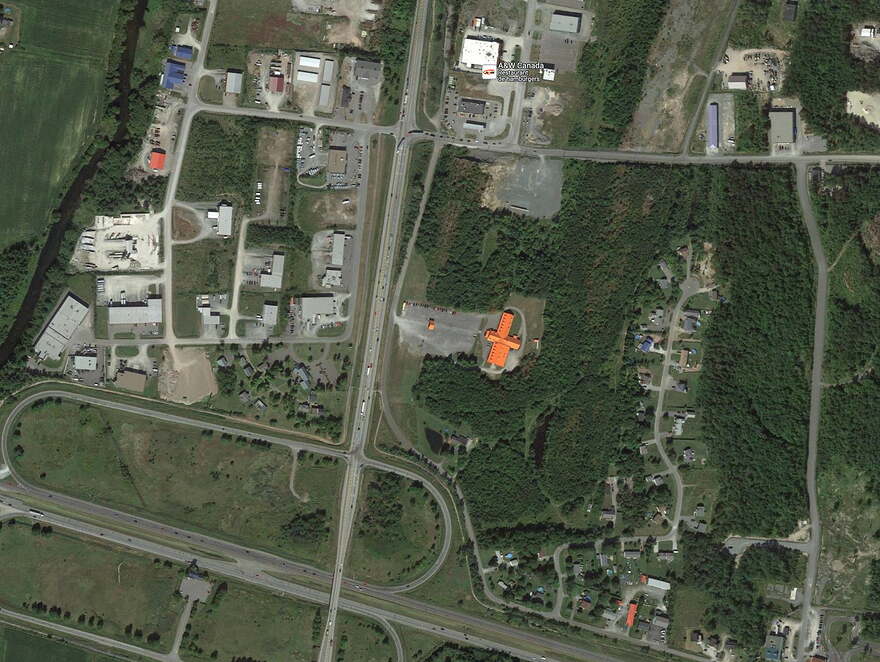 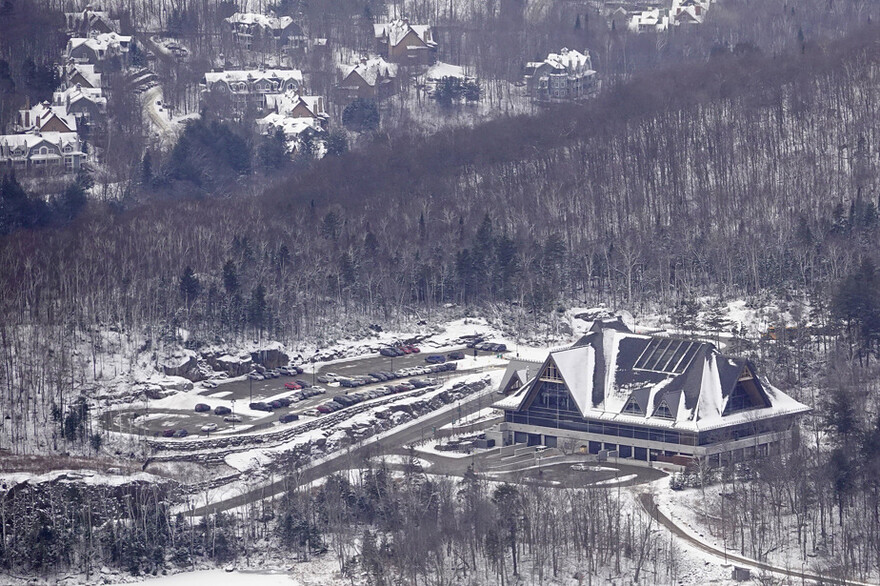 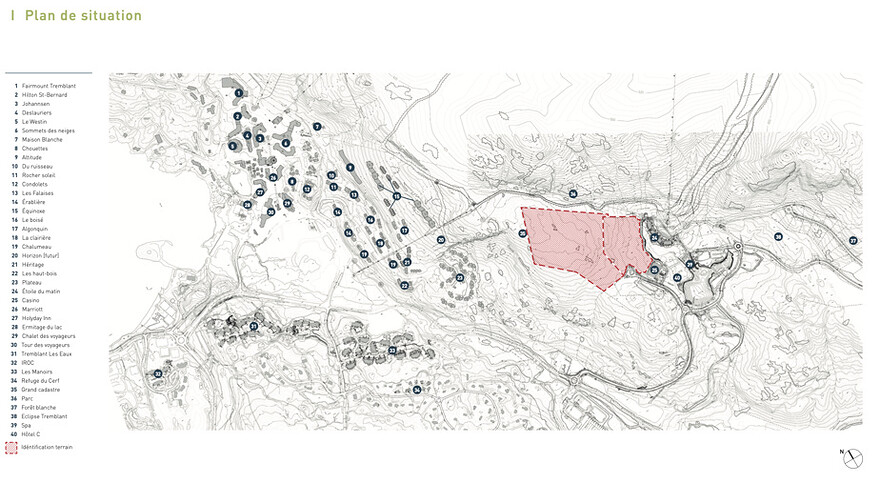 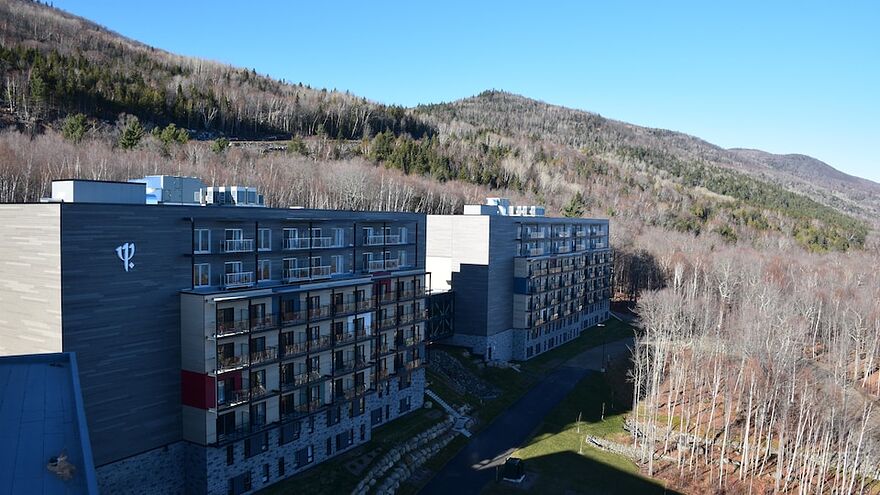 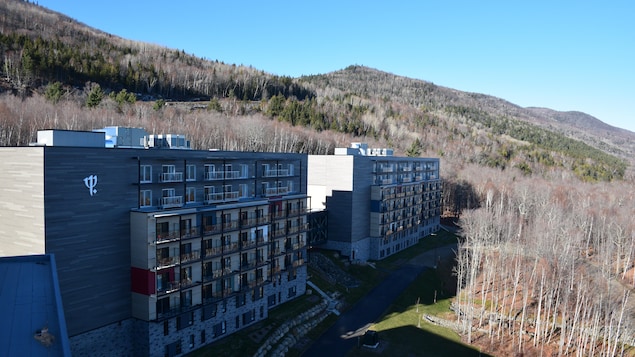