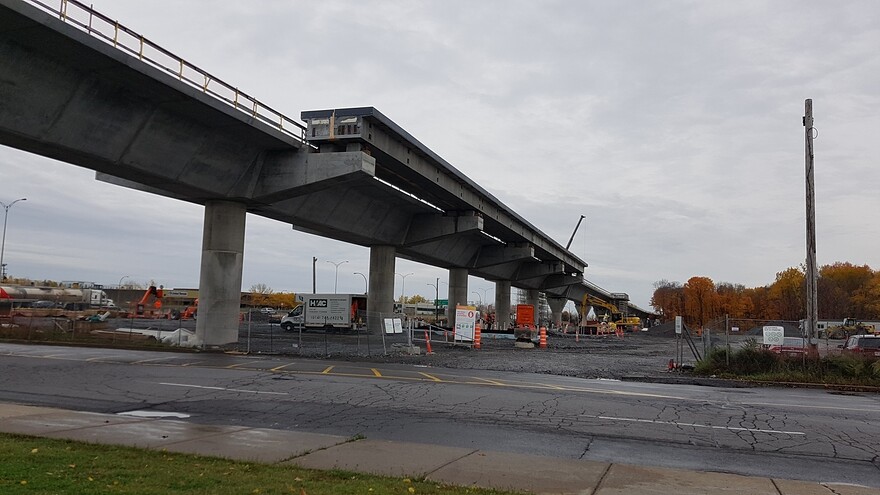 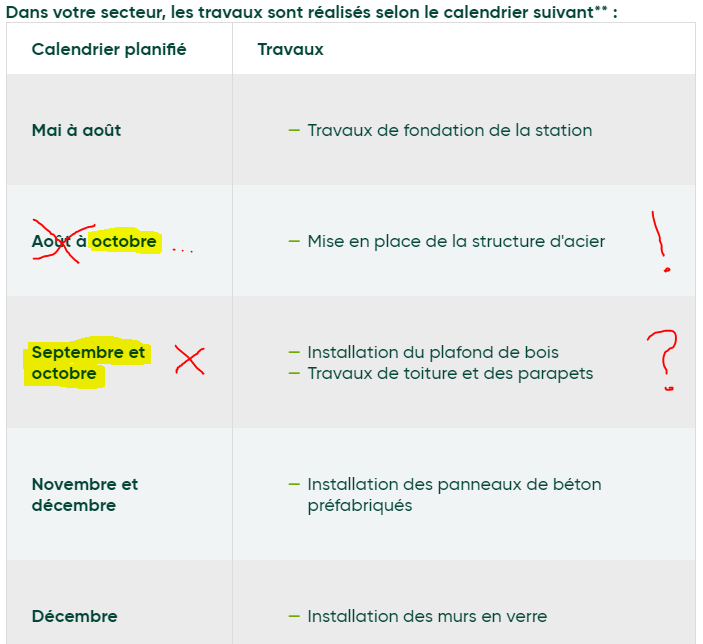 Call me cynical but I’m glad this network will be “owned” and operated by a for-profit organization; one hopes that it’ll look clean and well-maintained as a result. Like or dislike the concept, I can’t help but think it will take a miracle to keep the entitled degenerate West Island youths from destroying it in a hurry. 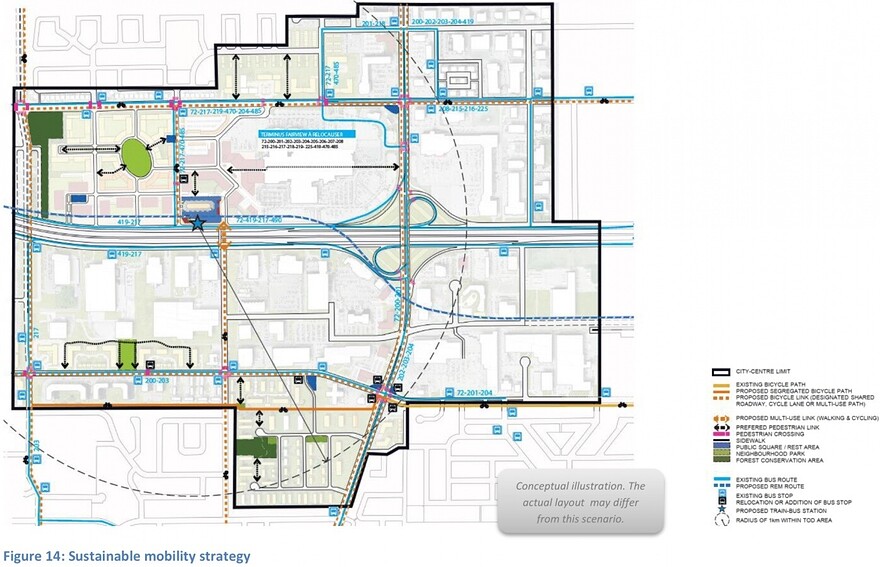 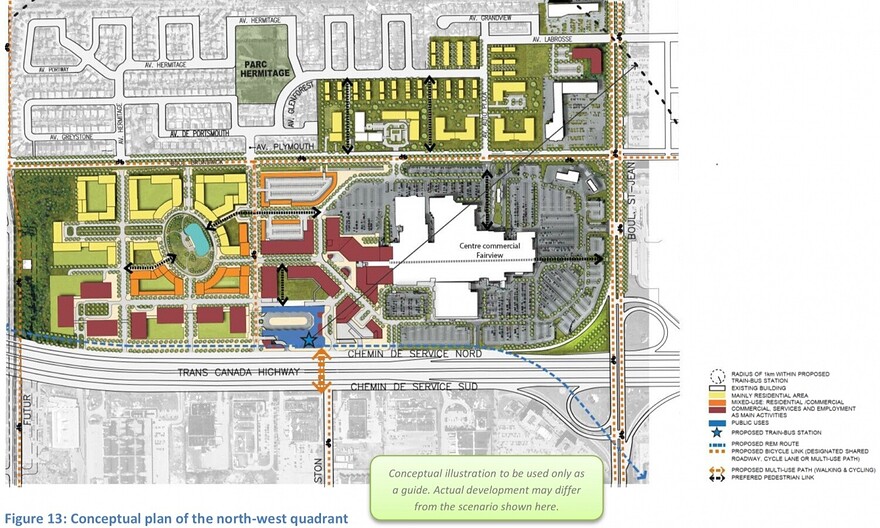 Again, both very old plans — note the REM passing in front of the Holiday Inn and the station near Sears/Simons east of Avenue Fairview. It remains to be seen what the first actual proposals from CF/IC are like.

SameGuy said: Again, both very old plans — note the REM passing in front of the Holiday Inn and the station near Sears/Simons east of Avenue Fairview. It remains to be seen what the first actual proposals from CF/IC are like.

Regardless, Pte-Claire can’t do a single thing about over/underpasses without the consent, planning, commitment, and financial backing of the MTQ, so the likelihood of anything useful happening at Alston or Stillview is still slim. Lest we forget the “Pierrefonds-Kirkland Urban Boulevard”… 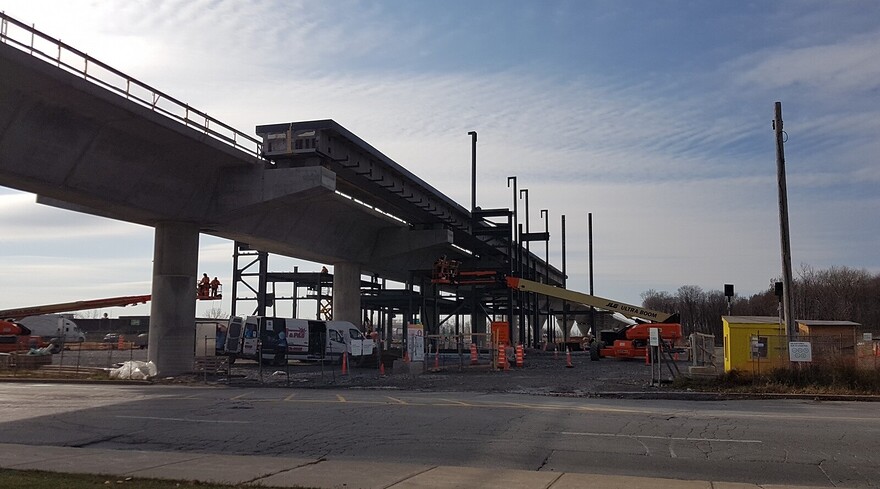 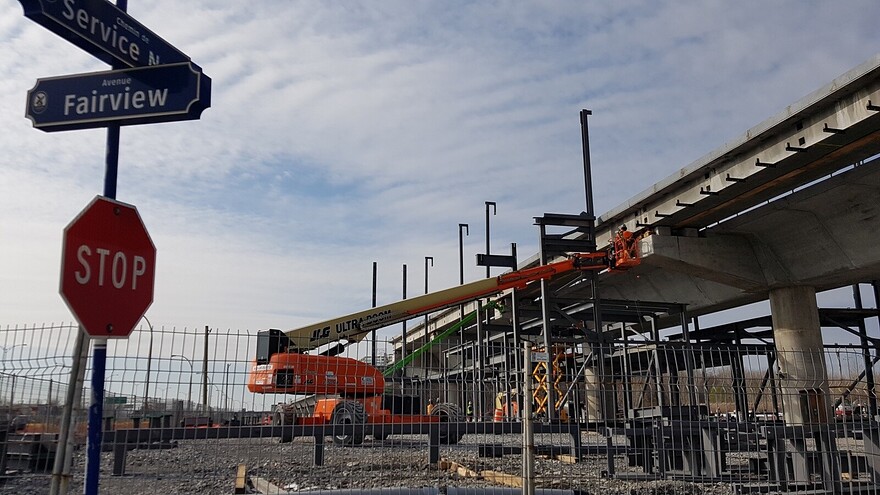 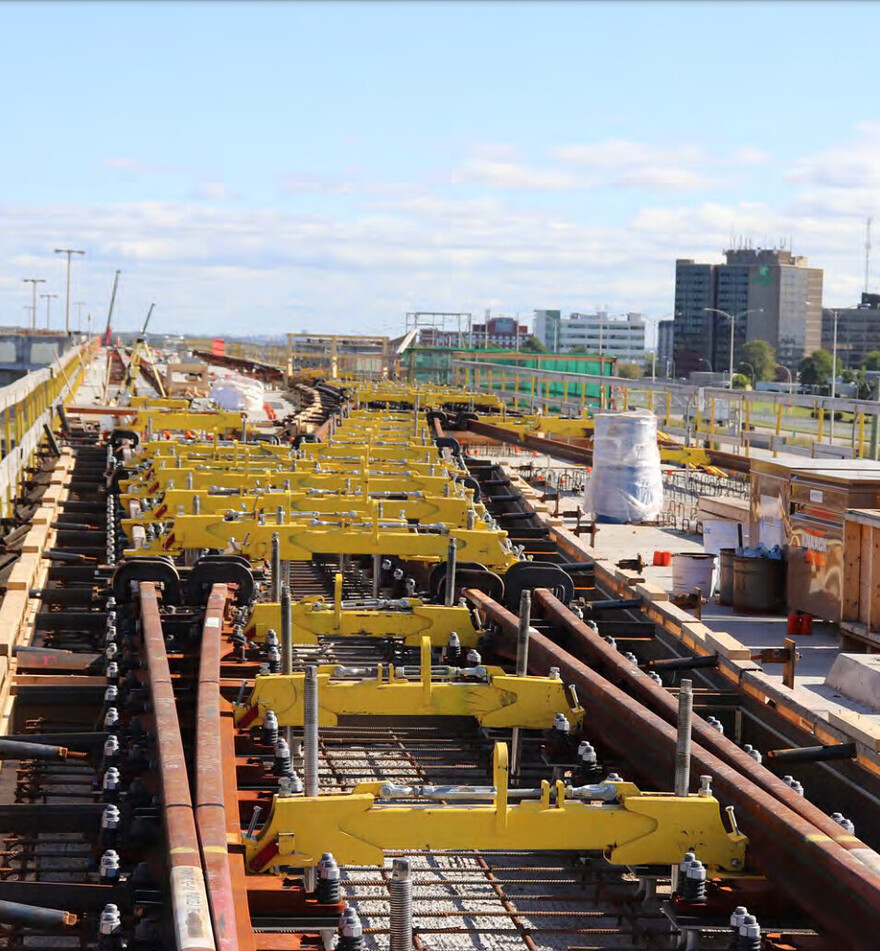 There’s a slight difference, though: Kirkland station is above the park while the TOD will be across the Jean-Yves to the west; CF/IC’s plan for Fairview station was always that it will be the focal point of the new “downtown Pointe-Claire” development and the existing CF Fairview mall will be redeveloped as just one component of that project. But I don’t disagree with your opinion, either! It could be 15 or 20 years before most of the Fairview TOD is in place and active, in the meantime the current CF mall is still the centre. Without an elevated walkway, pedestrians trying to access the REM station from south of Highway 40 face a difficult and dangerous 2-km walk. 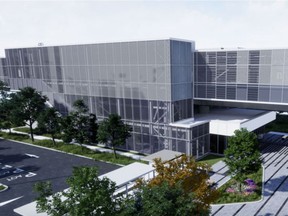 An image of the future Fairview–Pointe-Claire REM station along Highway 40. A bus terminal will facilitate access to the station from residential neighbourhoods in the West Island. REM

Some local businesses have put forth a proposal for a north-south pedestrian walkway over Highway 40 in Pointe-Claire that would facilitate safe access to the future REM station next to the Fairview shopping centre.

“We are trying to convince CDPQ-Infra to consider incorporating a pedestrian connection over Highway 40 linking the new station to this sector,” said Robert Libman, an architect employed by Olymbec, which owns a business property at 7600 Trans-Canada Highway, directly across from where the new REM station is to be built.

“Otherwise, instead of being a stone’s throw away, users of this station will have a very long and dangerous walk every day,” Libman said.

Without an elevated walkway, pedestrians trying to access the REM station from the south side of Highway 40 must walk east to St-Jean Blvd., cross over the highway overpass, and then head back west.

Access is not any safer for cyclists in the immediate area.

“Access for pedestrians to and from the new station via St-Jean is a very difficult two-kilometre walk and extremely dangerous with the configuration of the intersections and the Highway 40 ramps,” Libman said

“There are many points of potential conflict between pedestrian and fast-moving vehicles.”

He said the south side of Highway 40 includes an industrial/commercial sector, as well as Kuper Academy school and recreational facilities.

A letter proposing a pedestrian walkway was sent to CDPQ-Infra, builders of the REM, on Oct. 26. It was signed by representatives from Olymbec, Future Electronics and Capcium Inc.

Derek Stern is owner of Olymbec, which owns and operates industrial, office, retail and residential properties. He said he would be willing to sell a portion of company property in Pointe-Claire as an access point to an overhead pedestrian walkway.

“If you build it, they will come,” Stern said.

Libman said a walkway “a no-brainer in many ways. It would really link that station directly. It would be a direct pipeline to so many people and it’s certainly a lot safer than what is likely to result right now.”

Libman has also reached out to local politicians. “I’ve spoken to Pointe-Claire Mayor John Belvedere and he’s favourable to it. But there is a question of who assumes the cost of that infrastructure, and who becomes responsible for it. I think the safety and security issue is paramount here and that should certainly trump other factors.”

Libman, a former politician, said he is concerned the walkway proposal could get bogged down in government bureaucracy.

“I’m concerned it might become a jurisdictional battle as to who becomes responsible. Is it municipal, federal or provincial? Often these jurisdictional debates paralyze things ever further when they shouldn’t be.”

Belvedere said the idea of a crossing over Highway 40 was being discussed even before the REM project.

Belvedere said the best location for a walkway has yet to be decided.

“We have many options. Stillview (Ave.) is another project. That’s one possibility. The other one is closer to (St-Jean), towards Fairview,” he said.

“We have to look at them all, and Montreal does, too, because it might be (considered a Montreal) agglo expense.”

If a future walkway offers direct access to the REM station, it should be paid for by the CDPQ, Belvedere said. “They should be considering how they’re going to get people from the south side to the north side. That’s the argument I’ve had with them since Day 1.”

In a statement, the CDPQ said it was working “with partners and local authorities to provide a tailor-made solution for each scenario. The reference project of the REM does not include any overpass infrastructure that crosses Highway 40.

“We will support the authorities that wish to undertake such projects to make sure they are integrated with the REM offering,” the CDPQ added. 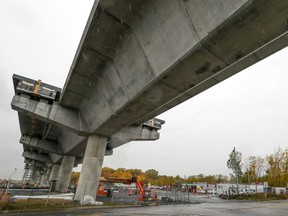 While work on most of the elevated structure has paused for winter and LG-Anne is parked until spring about seven spans east of the first (westbound) Ste-Marie overpass, while a few crews are installing rails and signalling equipment west of Fairview station, the construction of the Fairview-Pointe-Claire station is proceeding at full steam. The steel structure is gradually taking shape and the eastbound platform’s winter Tempo is in place; the westbound platform’s Tempo should be up soon and work will continue all winter. 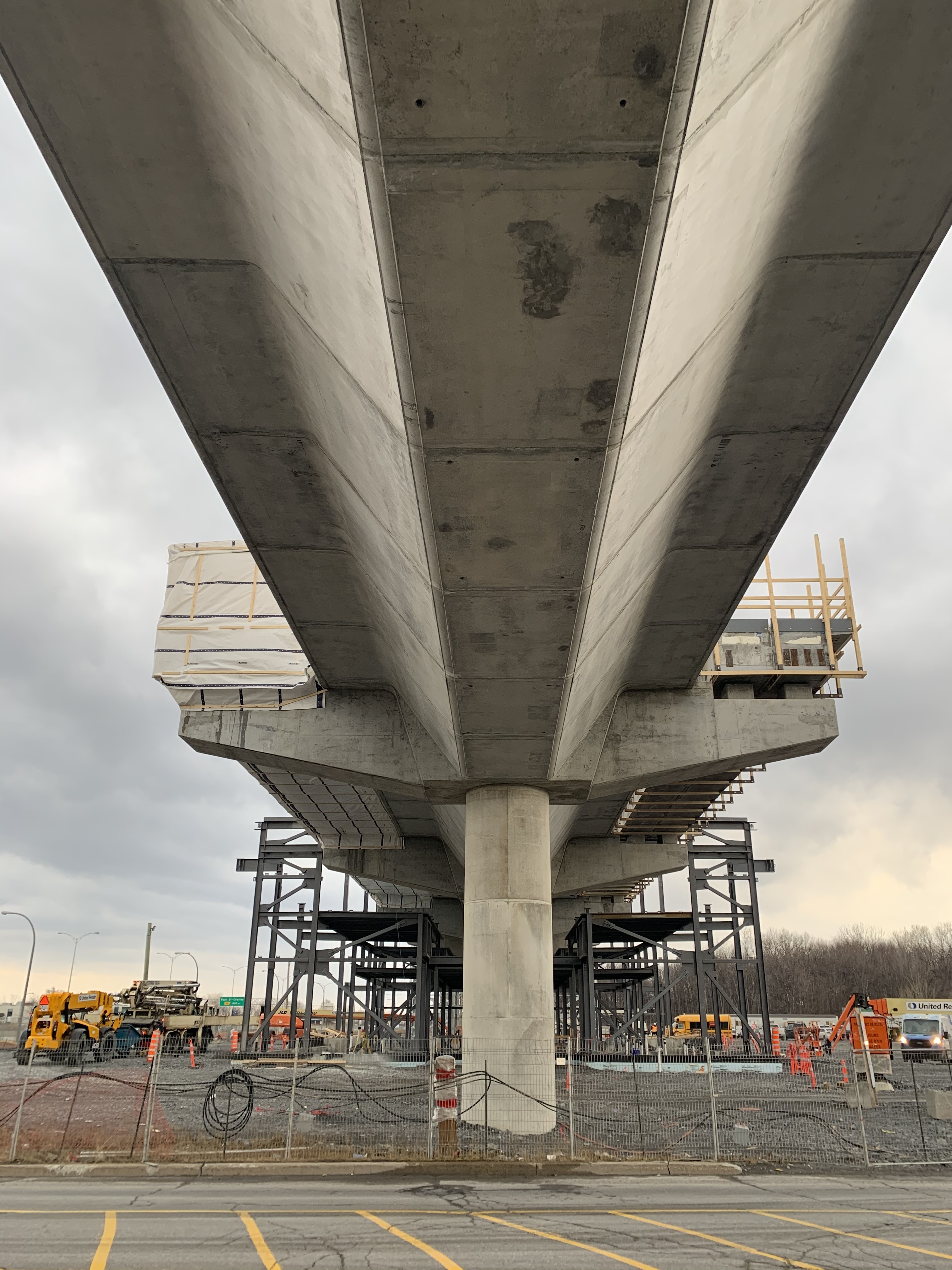 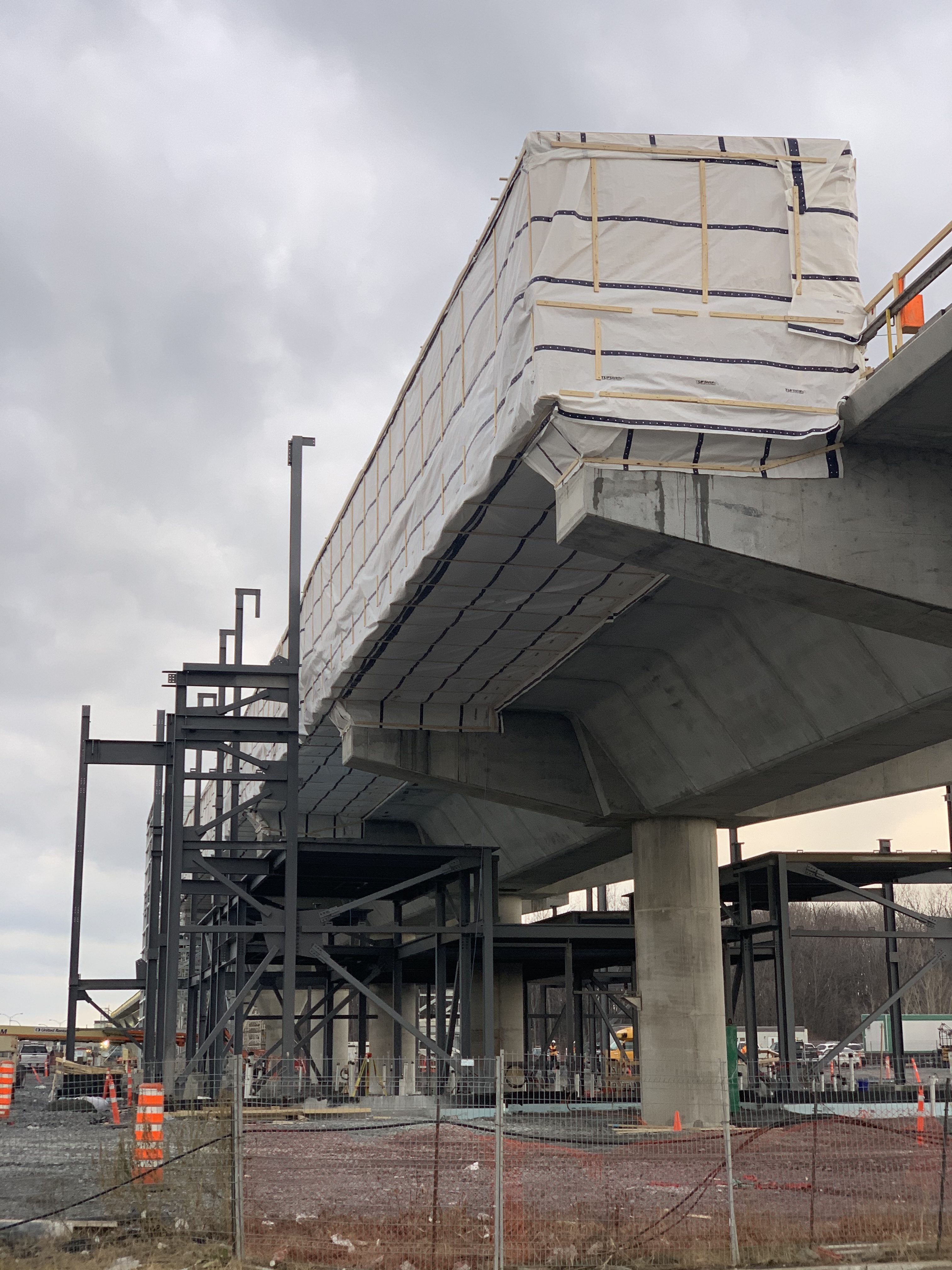 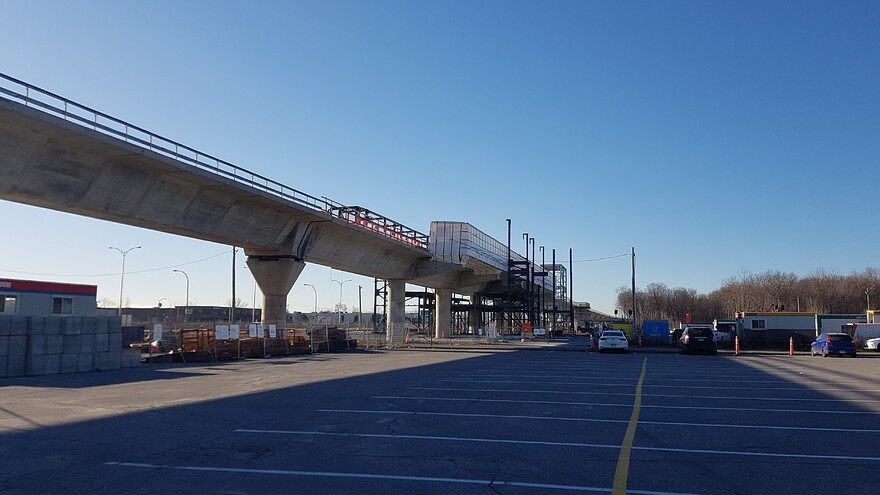 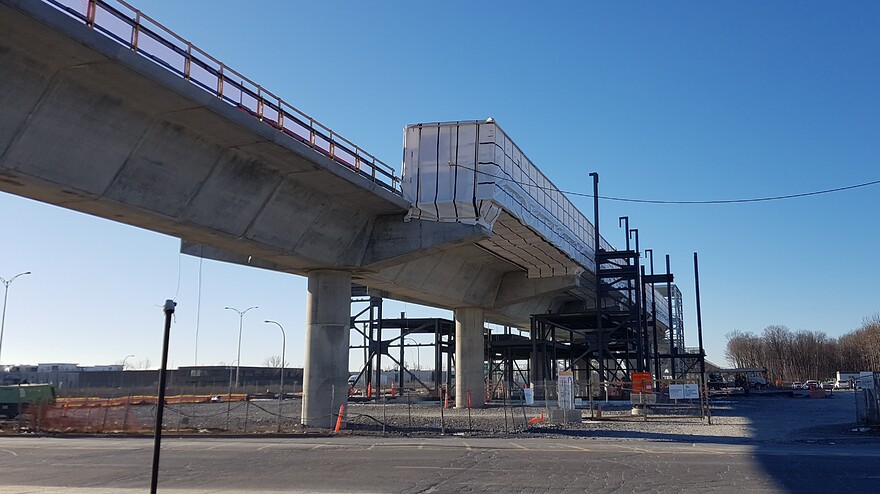 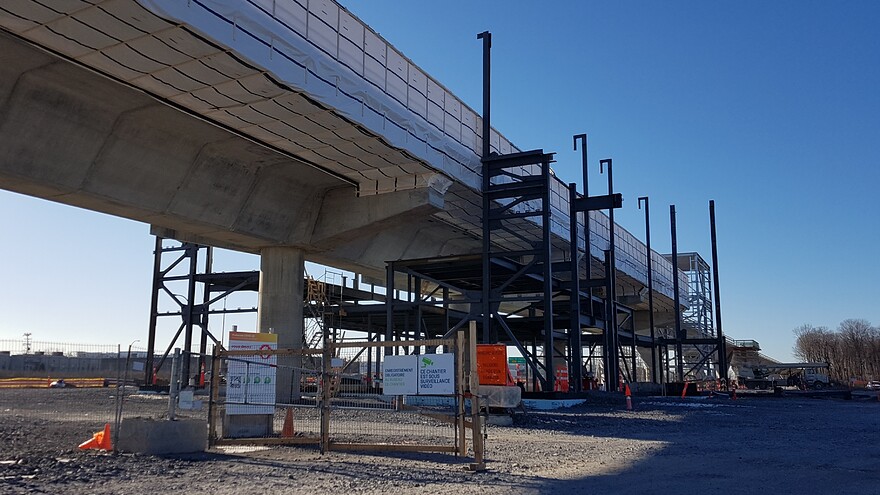 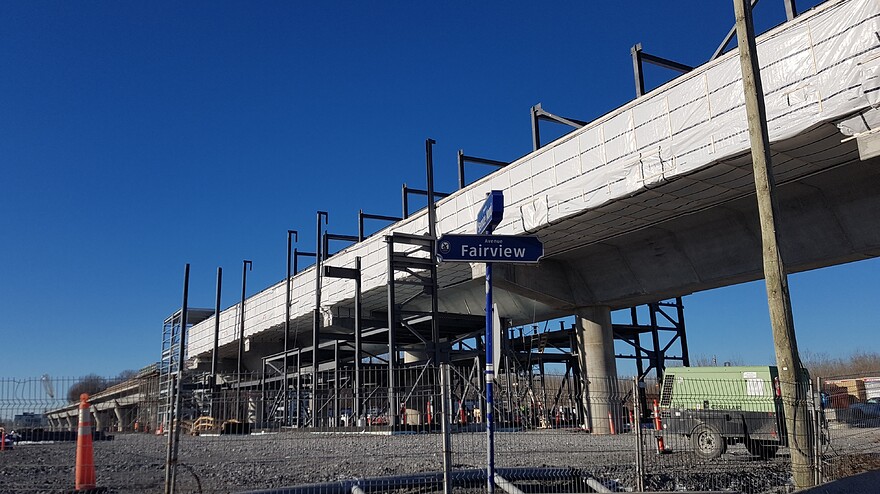 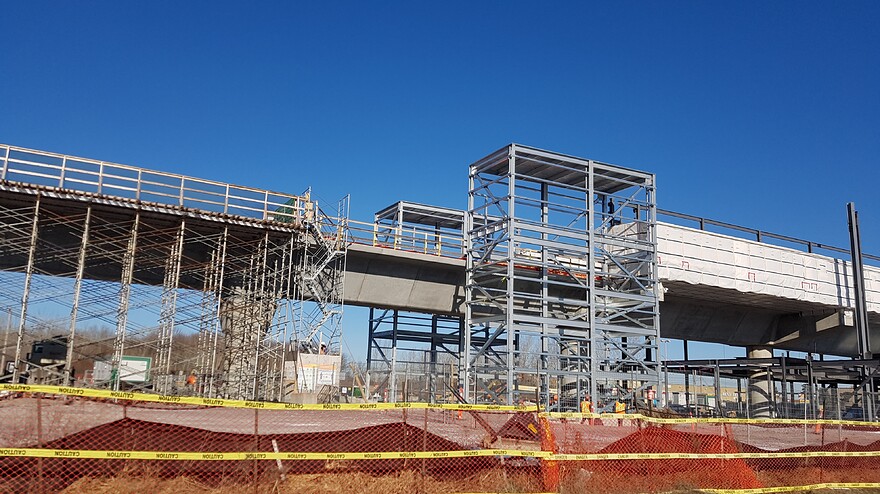 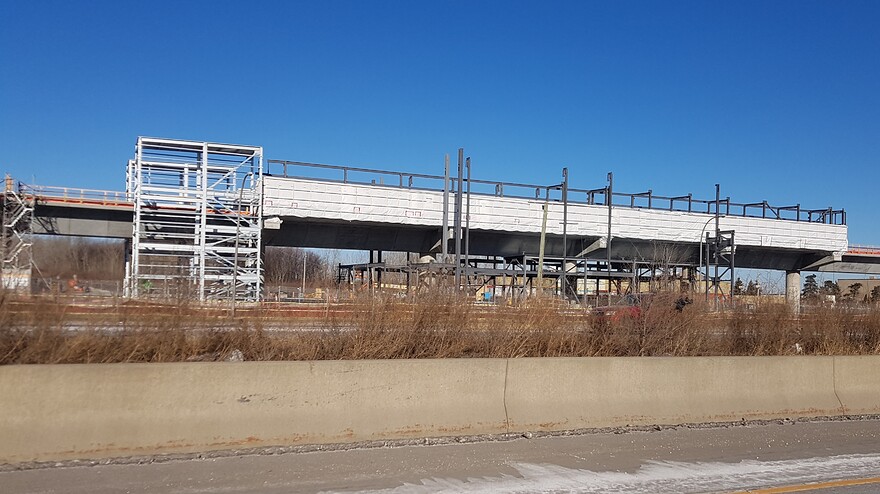