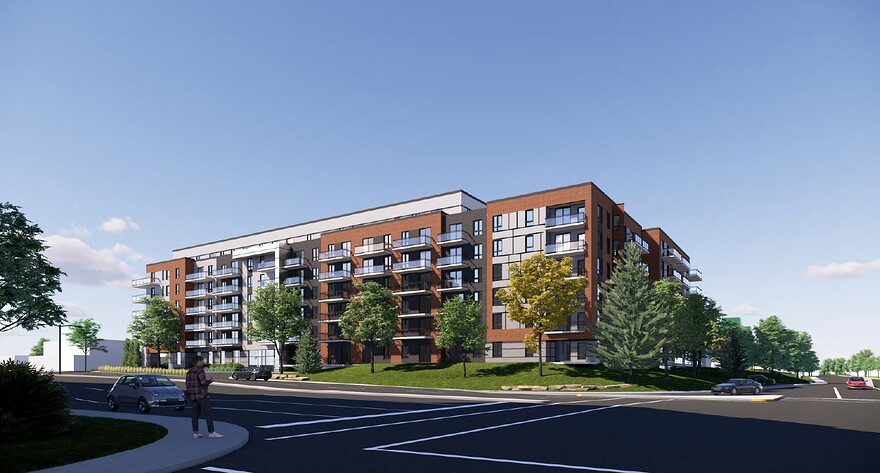 Good eye! It’s an interesting property, it’s not ideal for car owners but because it’s rental it might attract public transit users. It’s outside the one kilometre radii of either REM station but would certainly be along a bus trunk line going to either or both stations relatively quickly.

Wait this is st marie/st charles no? im not so sure about the bus service there… current options are about a 20-25 min bus ride to either kirkland or fairview; and it’s not very clear if the reform will improve the nearby lines’ speeds. Walking is also totally out of the question, it’s 30-40 min of walking to either REM station as well.

The trouble is even if we put a trunk line on, say, the nearby Hymus boulevard, a lot of time will be wasted doing the detour to get to Fairview on the other side (see bus 200 for an example), or going all the way down to Sources. The terrible placement of the Kirkland REM station is probably gonna be a big pain in the rear for any.many development projects on or near st charles tbh…

The terrible placement of the Kirkland REM station is probably gonna be a big pain in the rear for any.many development projects on or near st charles tbh…

I tend to agree with you, especially on the Fairview station. However if the Riocan development does materialize with heavy development and that new boulevard is ever built (in whatever form) then I suspect both would deserve a station.

I’m curious how the buses will work once the trains are rolling, but I feel like a station at St-Charles will be missed for connections sake. I think we might also be missing the same for the A13 station. Getting more people to take the bus over the bridge could be a good way expand capacity. Maybe put in a paid Park n Ride garage? Idk.

TBH i feel like des Sources is the only west island REM station that’s appropriately placed (not counting the two former DM stops which are IMHO well placed). Easily accessible from both sources and hymus means that it’ll be easy to send buses there, unlike all three others which will require insane detours to get to by bus (granted the urban boulevard where the A440 ROW is will probably help kirkland, but it’s still an unsuitable replacement for a station on st charles if you ask me)

Fairview’s placement I find is particularly odd. I quite like how close the current fairview terminus is to the actual shopping mall, it makes it convenient to combine shopping with my transit trips (I can pop in and shop while i wait for my 30 min transfer or whatever), the new location feels just way too distant if you ask me. I can somewhat understand if Fairview doesn’t want to give up that much land/parking to build a new terminus in the corner @SameGuy mentioned; granted, I think a closer REM station would probably bring in more shoppers than the few dozen parking spots would.

An A13 station would be a bit awkward. Short of sticking bus lanes on A13 and detouring buses from Laval to it, that station won’t be very helpful unless as you said we build a giant parking lot there; granted I’d imagine that it won’t be that feasible for similar reasons explaining why the large parking lot at Kirkland got canned.

Sources is in a no-man’s land though, a really terrible walk from any residential areas. And the A440 boulevard has been permanently scrapped.

The entire branch is rather poorly conceived overall. It’s been discussed quite a bit, earlier in all these threads. It’ll be a net benefit to the West Island overall, but could’ve been OH, so much better.

Sources is far from residential areas, and is in the middle of low-density light industries and warehouses; Fairview is almost as distant from the busiest intersection in the western suburbs, instead lying adjacent to a proposed “Downtown West Island” project that will likely never see the light of day (merci les NIMBYs); Kirkland faces a similarly bleak future thanks to PM; and Anse is near the entrance to a regional park instead of across the highway in an industrial park with 20,000 workers; they built the guideway lower, to save money, thus rendering the imminent rebuilding of boulevard overpasses and interchanges much more difficult and expensive, and all but eliminating the proposed crossing at Stillview from ever getting built; there won’t be any new incentive parking, ignoring the fact that WI residents don’t live in PM’s Utopia, with Bixis and sidewalks and a grid of bus routes, and shops and restos within a hundred metres of our doors, and of our kids’ schools. Boiling it down, it’ll be easier for many people in the West Island to just continue hopping in the family SUV to get where they need to go on a daily basis, as well as to anywhere special — including the airport. The airport. The airport that’s in the the West Island, yet won’t be a one-seat ride from anywhere in the West Island.

Edit: mods: sorry about the tangent.