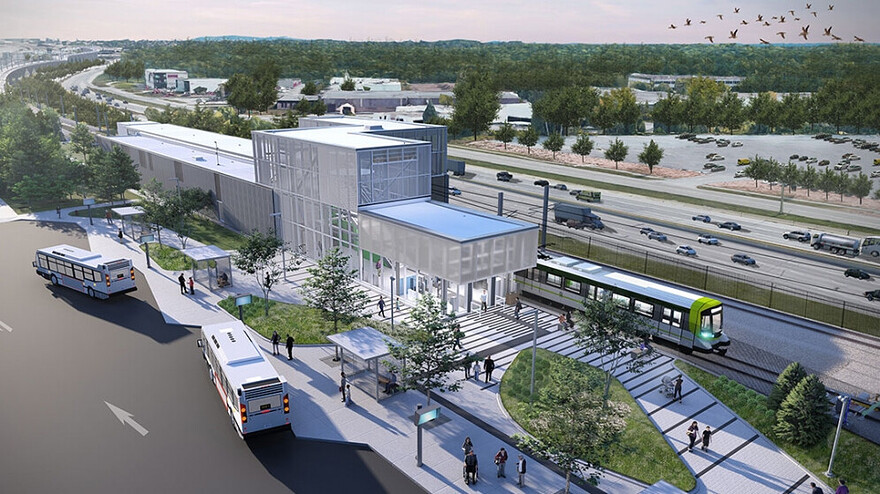 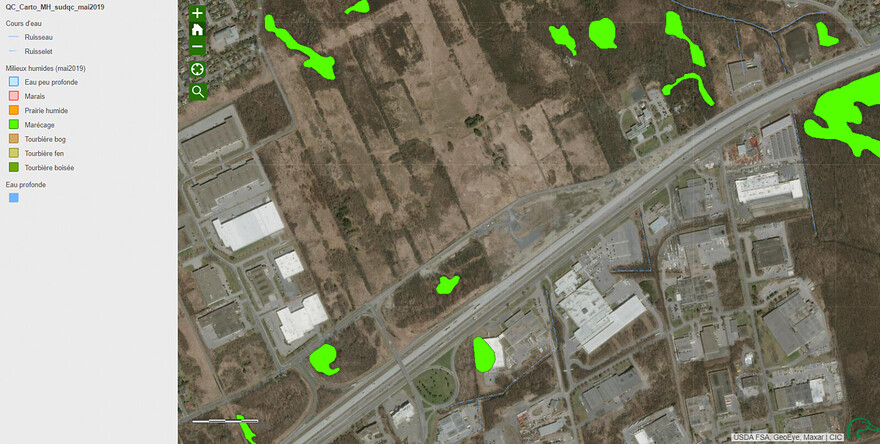 I really don’t see a near- to midterm possibility of an extension across so much farmland out to Vaudreuil. Don’t get me wrong, I would love to see it happen, I would love to see modern rapid transit everywhere. But the reality is, there is 12 km of nothing in between Kirkland and Vaudreuil. You would get a much better return on investment by spending $1 billion to upgrade exo1 to modern suburban train standards with a dedicated right of way.

Originally the station was supposed to be exactly at the green splotch just west of its present location, with direct access to Morgan Road and the overpass to the big industrial park. Mais à cause des marécages le plan a dû être changé.

Originally the station was supposed to be exactly at the green splotch just west of its present location, with direct access to Morgan Road and the overpass to the big industrial park. Mais à cause des marécages le plan a dû être changé. LOL I’d love to know what that well-manicured parking lot is across the 40.

SameGuy said: LOL I’d love to know what that well-manicured parking lot is across the 40.

SameGuy a dit : LOL I’d love to know what that well-manicured parking lot is across the 40.

Baie-d’Urfé has been begging for a formal connection from the north to its eponymous station on exo1 for decades to help with public transit access to the busy industrial park. It would be ridiculous not to facilitate access from the industrial park to Anse-À-l’Orme REM. 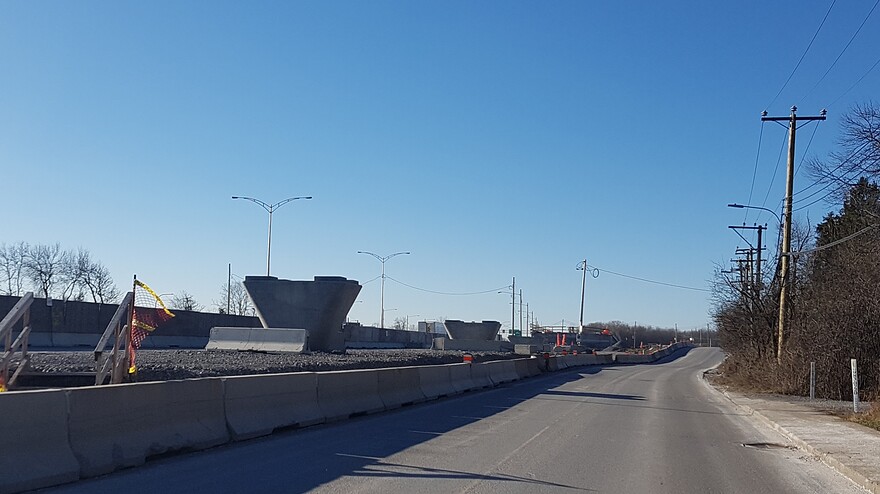 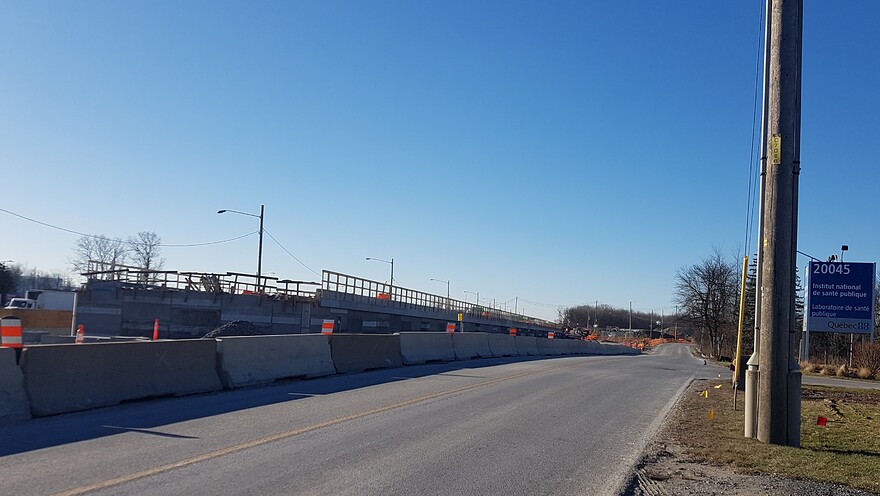 The Anse-à-l’Orme station will be the REM’s terminal station on the West Island, located in Ste-Anne-­de-Bellevue. It will be equipped with a park-and-ride lot and a bus terminal to serve neighbouring municipalities. https://rem.info/

Ste-Anne-de-Bellevue Mayor Paola Hawa says she is worried a massive new development on the RioCan site in neighbouring Kirkland will lead to daily traffic jams around the future Anse-à-l’Orme REM station.

Because the Anse-à-l’Orme station in northern Ste-Anne is the last link on the West Island branch of the REM light-rail network, Hawa says the station is a traffic snarl waiting to happen.

She said the arrival of hundreds of transit buses from the off-island, combined with local commuters trying to drive their cars to the station, is going to turn the station’s Chemin Ste-Marie access road into a daily traffic jam.

“The RioCan project is wonderful and it’s great that it will be repurposed, but I’m very, very concerned about the traffic impact of that project,” Hawa said. “Without a new overpass (on Highway 40) in Kirkland, I really don’t see how that can work. Plus, you’ll have about 60 buses an hour coming from Vaudreuil into the Ste-Anne’s REM station, so I don’t see how this will end well.

“The overpass that goes over Highway 40 (near the RioCan Centre) is already at maximum capacity. So can you imagine adding more cars?

“And then, of course, you’re going to have the addition of cars that will try to find parking at the Ste. Anne station and if they won’t be able to, they’ll take Chemin Ste-Marie again to try and do the same thing in Kirkland.” 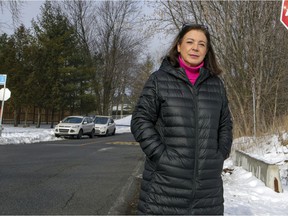 Hawa said the initial REM plan was for the Kirkland station to offer a substantial park-and-ride option.

“So what you see today does not at all reflect what the original plan looked like. The original plan, in my opinion, was well thought out. It’s all the subtractions that came afterward.”

Gibson added he is confident there will be some kind of parking arrangement for users of the REM station, which is to be operational by 2023-’24.

He said major stakeholders, including the Caisse de Dépôt, RioCan, Broccolini and city of Kirkland, have to hammer out a parking solution.

“If the REM wants the station to be successful, everyone will have to work together,” Gibson said. “RioCan and Broccolini have to sit down with the REM. In our discussions with them, we’ll let them know we need some parking.”

The Anse-à-l’Orme station in Ste-Anne is to have 200 park-and-ride spaces, including 20 spaces reserved for carpooling, four parking spaces with electric car charging stations and three universal access spaces.

There are 10 bus platforms, and drop-off areas for kiss-and-ride, para-transit and taxi spaces. There are also 20 spaces planned for bicycles.

Hawa said she is worried motorists searching for a REM parking spot will converge on the Anse-à-l’Orme station, which is located just north of Highway 40, on Chemin Ste-Marie, between l’Anse à l’Orme Road and Morgan Blvd.

The entrance to the park­-and-ride lot is on Chemin Ste-Marie, which Hawa says is already operating at maximum capacity. She said Chemin Ste-Marie is one of the oldest roads in Montreal and wasn’t built for heavy traffic.

“It dates back to the 1700s and you can’t enlarge it. It’s always going to stay a two-lane, semi-country road.”

Hawa said she has been in discussion with CDPQ Infra (builders of the REM) and several transit authorities, including EXO, but has gotten nowhere.

Unless there are substantial changes to existing infrastructure, buses rerouted and more parking added at other stations, she said the traffic along Chemin Ste-Marie is “a disaster waiting to happen.”

Really couldn’t stop for better pictures, but the structure of the station is going up fairly quickly now. 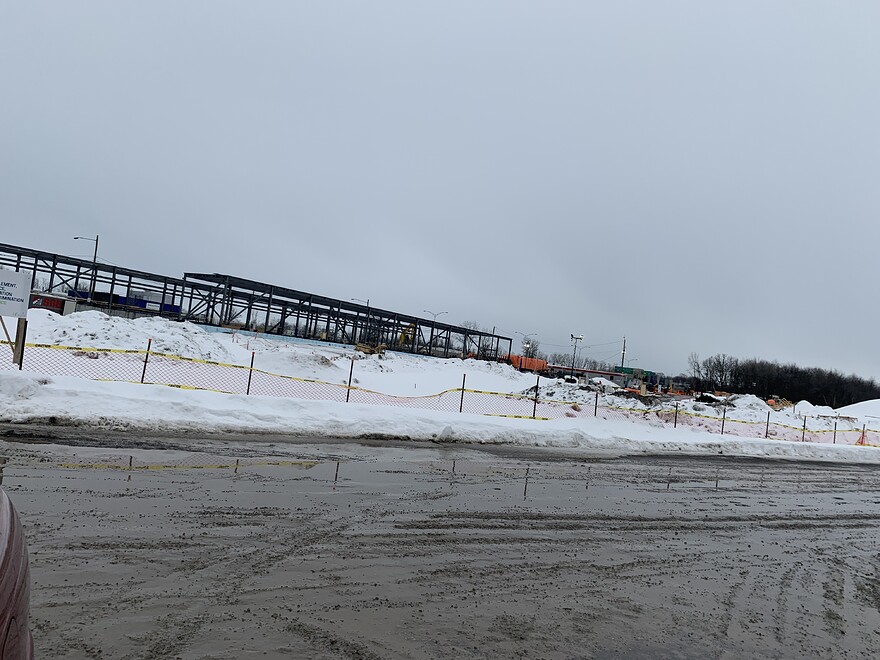 I will stop by on a sunny day next week and see if I can get some better angles. 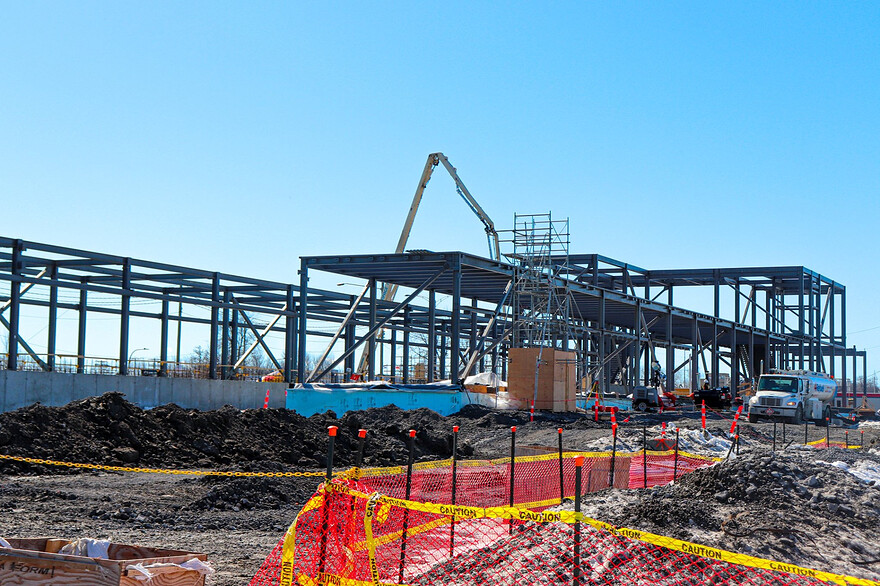