The brand takes its inspiration from Danish housing projects which Maître Carré founder and president Hugo Girard-Beauchamp saw in Copenhagen. It has been launched in Brossard on Montreal’s South Shore with a $70 million project.

Construction of the 254-unit, 12-storey building at 8405 Place St-Charles, on the shores of the St. Lawrence River, is scheduled to be completed late next summer.

“It aims to foster a community and encourage healthier lifestyles,” Girard-Beauchamp said of Mellem.

He said living spaces have long been designed with little consideration for the environment in which residents will live. However, the residential design he saw in Denmark three years ago “served the community.”

Mellem will feature a large communal garden where classes about urban agriculture will be available to tenants, a public square and neighbourhood store.

Staircases on the first three floors will be livened up to encourage people to get some exercise by using them, rather than the elevator. There will also be an indoor pool for year-round use.

“Real estate has an influence. It can inspire,” he said. “It’s our duty as developers to give our residents the tools to have a positive influence on their daily lives.”

Originally a general contractor who built housing projects, Girard-Beauchamp launched Maître Carré in 2009. “I was a bit tired doing other people’s projects.”

Maître Carré has gone on to build more than $500 million worth of projects.

The company name is a play on words of metre carré or square metre. Maître means master and the name signifies “we master the design of our buildings.”

The growth of Maître Carré

While it initially built small, low-density condos and townhouses, Maître Carré gained the trust of investors like Fiera Real Estate – a long-time partner and major investor in Mellem – and started to build larger multiresidential rental projects in 2015.

Maître Carré’s first major project was Le Raftman, a 48-unit rental project in Sainte-Catherine on Montreal’s South Shore. “It was a game-changer from a business perspective. We really wanted to continue in this direction.”

Brickfields, the company’s most complex project to date, began in 2015. It involved preservation of the oldest building in Griffintown, the wood-framed Keegan House, built in 1825 on de la Montagne Street near Wellington Street.

The building ended up being integrated into the 14-storey mixed-use development.

Originally, “I didn’t know how to do it. Move the building temporarily from the site and then integrate it – it was quite a challenge. There’s a reason why we don’t do this in Montreal,” he said. “It was very complicated.”

He said “incredible coordination” was required with Hydro-Quebec, the Minister of Transport and municipal authorities to carry out the move. Developer Devimco allowed the building to be moved temporarily to one of its sites in Griffintown.

The building, which was refurbished with respect for its history, now serves as Brickfield’s lobby. 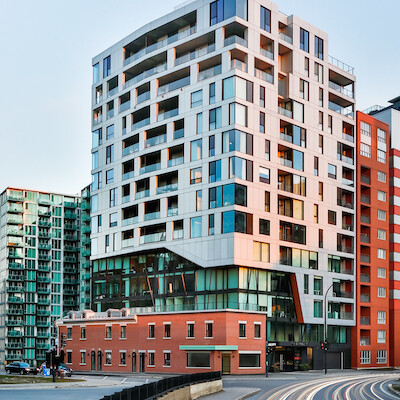 “It was a turning point in our career as developers,” Girard-Beauchamp said of the project. Today, 15-employee Maître Carré has its offices in the building.

Maître Carré is currently building the 25-unit boutique condo project Queen Alix at Alexandra Street and Alexandra Avenue in the Mile-Ex neighbourhood of Montreal. The project is 95 per cent sold and is slated for a December delivery.

The developer also has two yet-to-be-announced projects planned in Montreal, and one planned in Gatineau across the Ottawa River from Ottawa.

Mellem, which means “between” in Danish, will target a multi-generational clientele. However, Girard-Beauchamp estimated the first Mellem in Brossard will be comprised of 50 to 70 per cent empty nesters and young retirees, along with families aiming to benefit from a waterfront location and a safe neighbourhood.

Most units will have corner spaces designed to house offices.

“We thought of this before the pandemic hit because we saw a lot of people were working from home,” Girard-Beauchamp said.

Rents for studios in the Brossard Mellem start at $1,000, while three-bedroom units start at $2,340. All rentals include utilities, five appliances and Internet.

Girard-Beauchamp would like to see 2,000 Mellem units built in five years in Quebec cities where the demographics make sense, including Montreal, Quebec City and Gatineau.

Development elsewhere in Canada would begin once the Quebec market is saturated.

“Mellem will have a positive impact, but having an impact requires a certain volume,” he said. 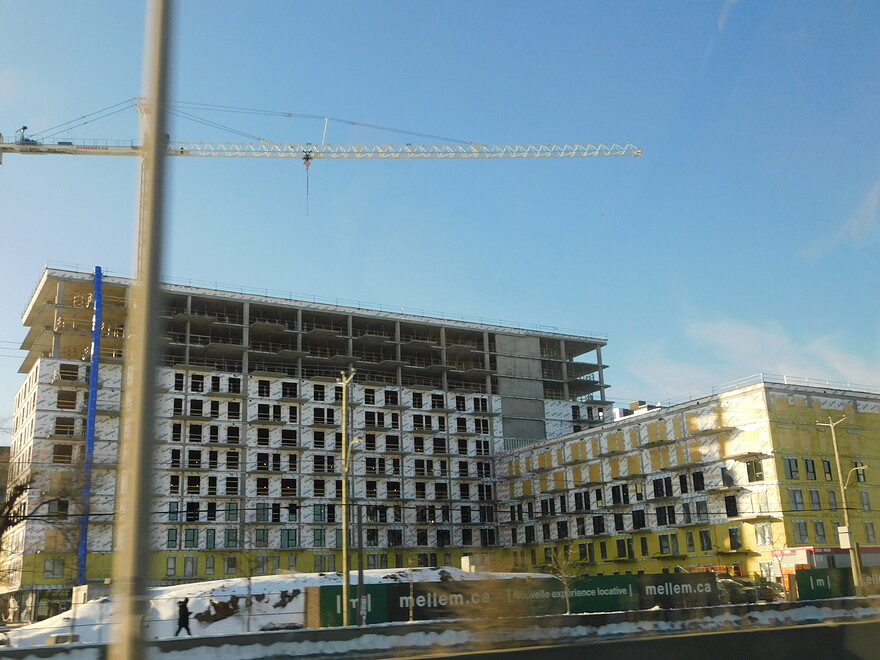 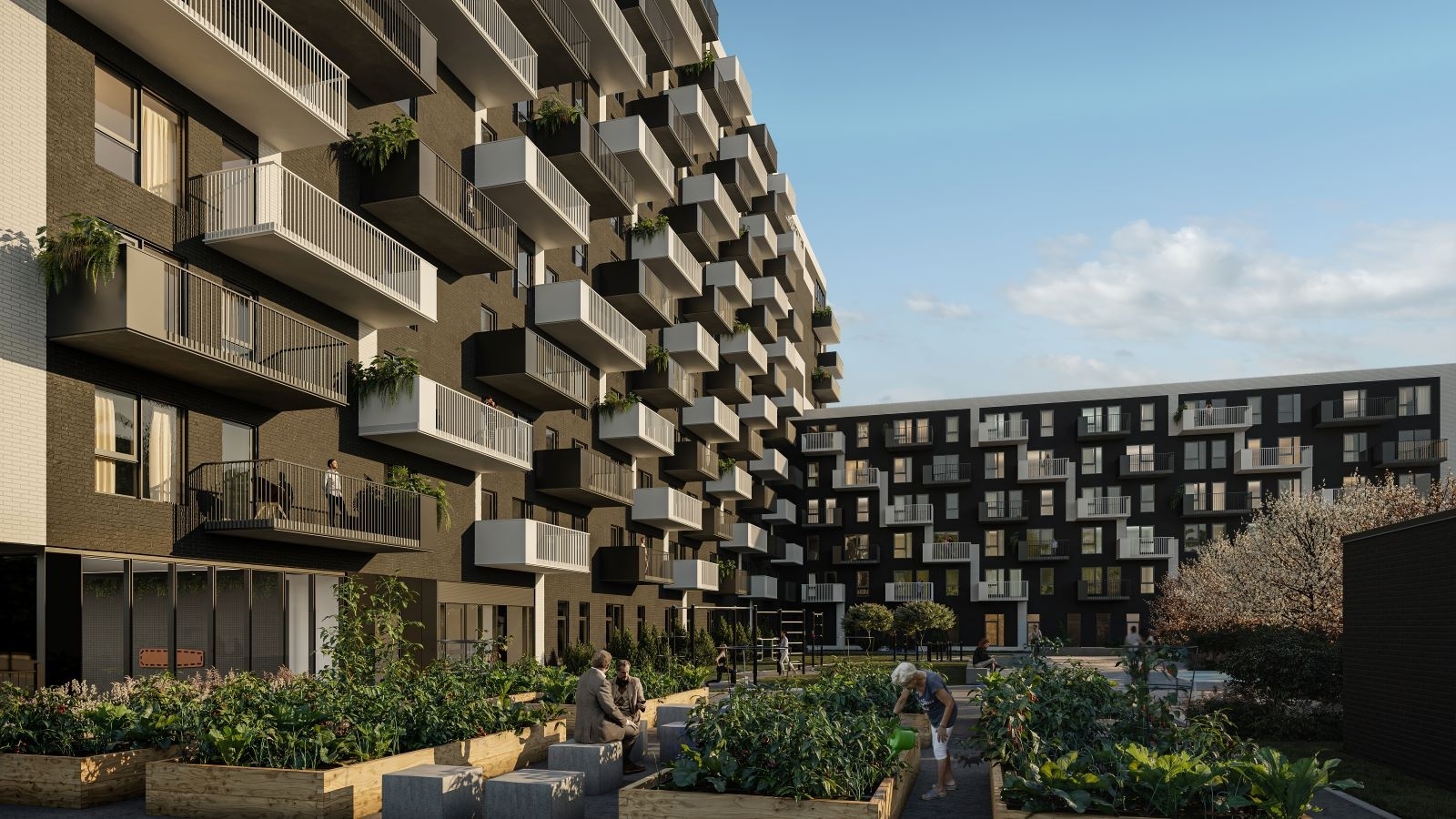 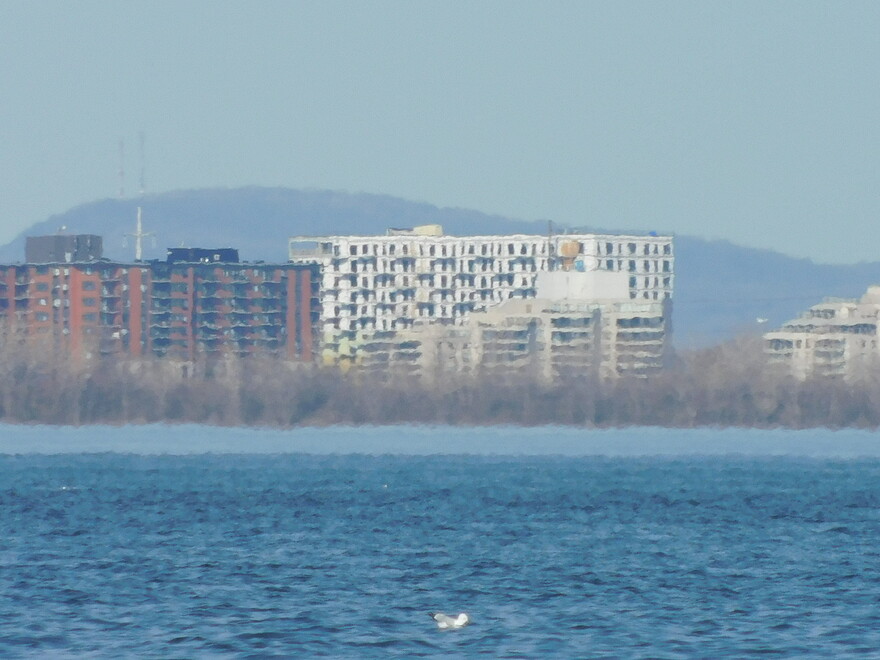 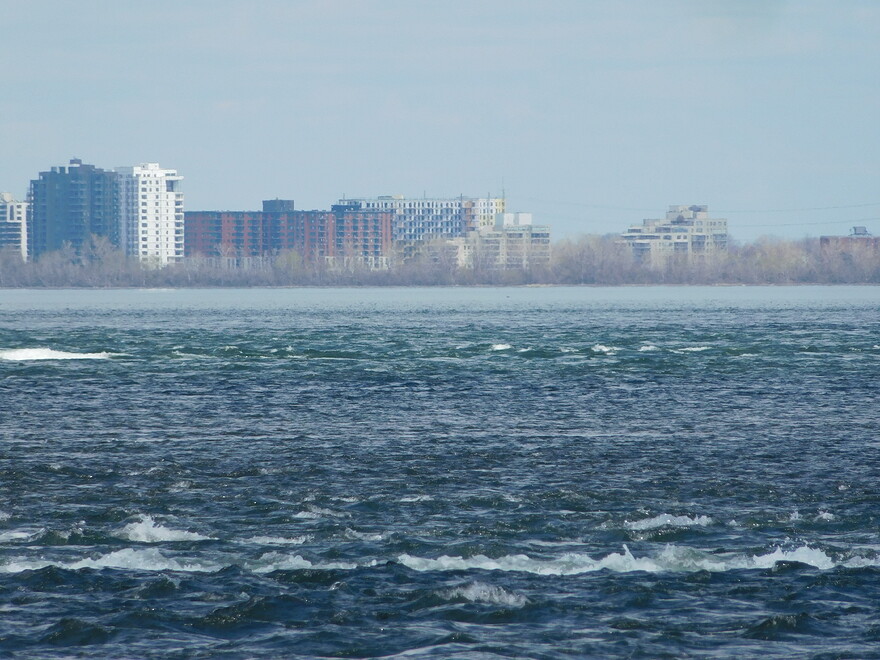 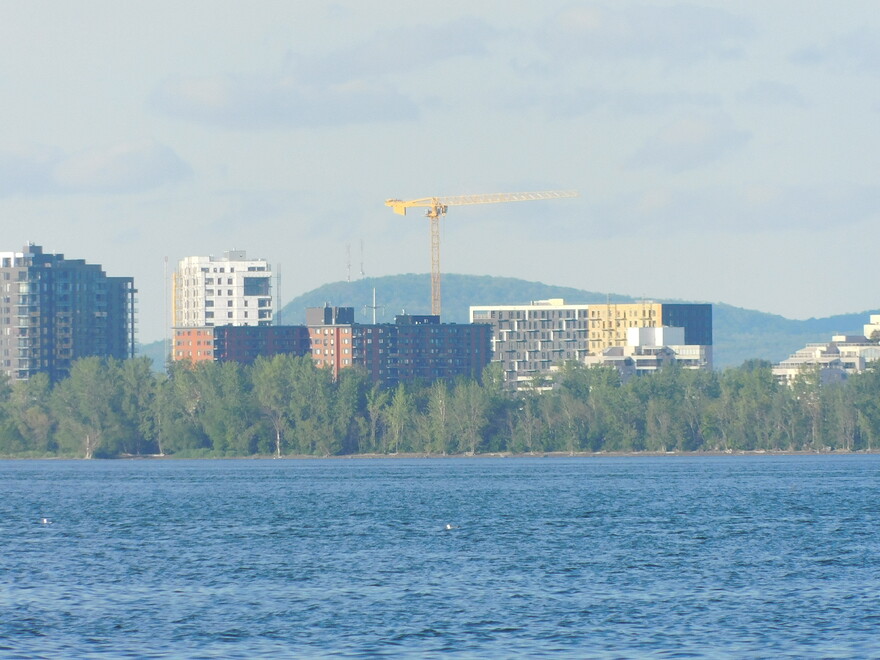 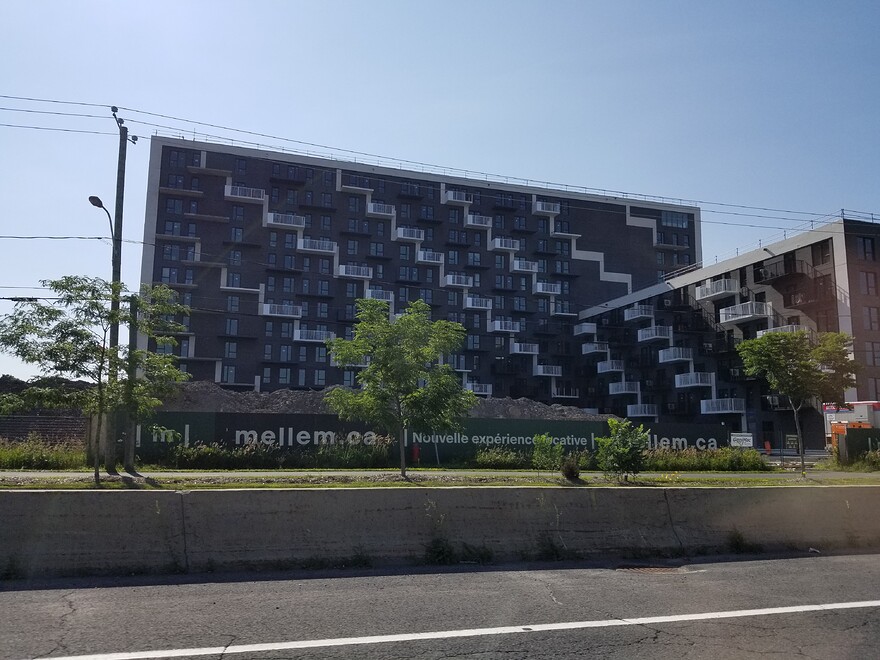 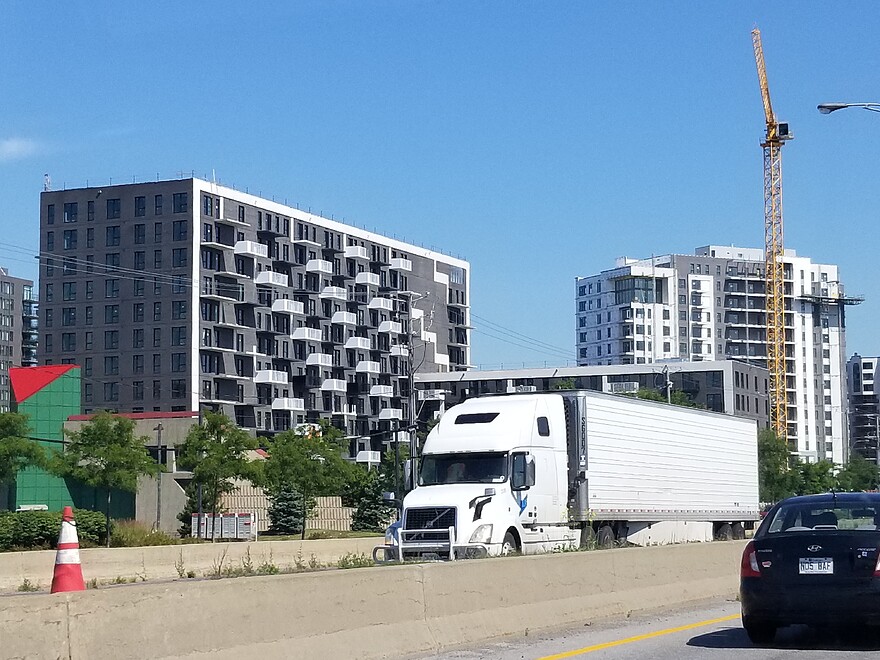 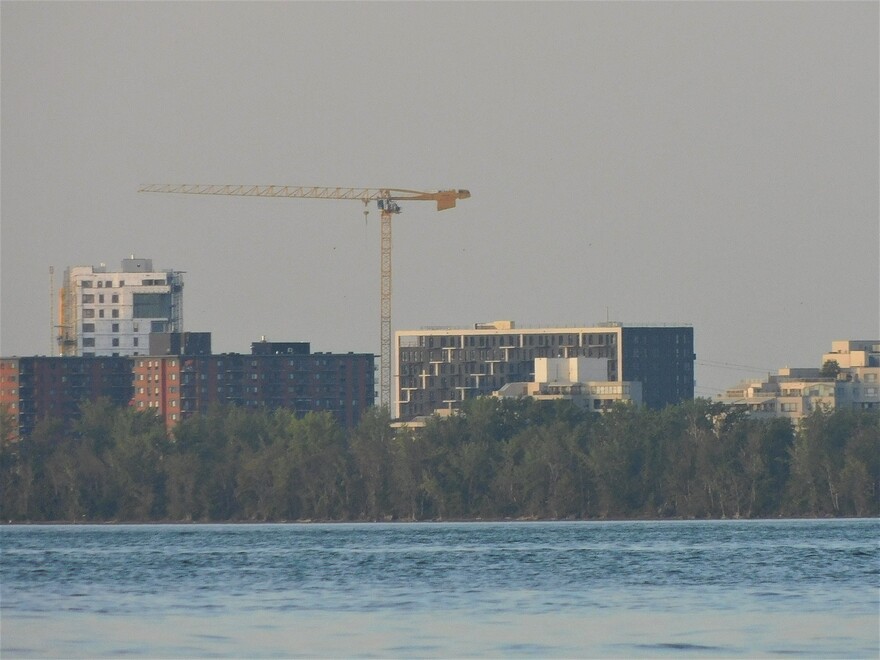