Oh it’s about time! That short stretch from De Salaberry to Devon is just so sad, with the long-abandoned NAPA Auto Centre, Scores and Vieux Duluth all rotting away between Chenoys and RBC.

Passed this way a few times over the last two weeks. The lot is now surrounded by rented fencing, and DDO has preemptively placed lane closure/detour signs on St-Jean. It seems demo is about to begin. If I see machinery on site I’ll update.

My wife’s godmother used to live on Morningside, directly across the street from the back fence of the old Goodyear, I can assure you that that little street isn’t anywhere near as large as in the render, and that will be a monstrosity for the people living on Morningside.

Don’t get me wrong, I am all in favour of increasing heights and densities along major arteries and boulevards, it’s just unfortunate that people who bought their homes on quiet side streets 50 years ago never expected densification to happen in their lifetimes! Lol

I was going to say something similar. Used to work at the McD’s our fence was right up against their front yard. I’m not super clear on how gradual the transition is, nor exactly how close to the property line they’ll be, but 8 floors will be rough, especially because it’s one solid mass the full length in the St-Jean direction.

And here’s another similarly tall building further North. The break up makes it a lot more pleasing. It doesn’t nescessarily need to be empty, but perhaps a drop to 4 floors in the middle?

All this to say, I don’t think it’s the worst implementation, but the people in front will only see
B U I L D I N G and based on what I see here, I can understand how much of a bummer it might be.

In @SameGuy 's reply, we see Les Colonnades changes in between the two pictures… Is there anything to be read into here? Or is there a project that I’m missing?

That “phase 3” has been marketed for two decades. Perhaps with the recent developments at Place Frontenac and along Brunswick (as well as the modern Brunswick Medical Centre across the street a couple of years ago), something might finally happen. The dealerships have only a finite amount of time before a new council approves re-zoning as per the most recent Pte-Claire master plan, and owners can’t turn away the big dollars these prime properties return.

Nearly 500 Dollard-des-Ormeaux (DDO) residents signed a registry with the city Thursday, forcing a referendum on a proposed large-scale housing project. DDO Mayor Alex Bottausci says he doesn't plan to hold a referendum on the project and will...

Nearly 500 Dollard-des-Ormeaux (DDO) residents signed a registry with the city Thursday, forcing a referendum on a proposed large-scale housing project.

Now, the fate of the unused lot on St-Jean Boulevard near Salaberry Boulevard is back up in the air.

“We are both elated and surprised, but we are happy that our message got out to so many people,” said DDO resident Deborah Ancel.

DDO Mayor Alex Bottausci says he doesn’t plan to hold a referendum on the project and will instead ask the developer to present a new plan for the lot.

“My feeling is that [a referendum] would be wasting everbody’s time and increasing frustration levels. At some point, just stop. Let’s go back to the drawing board if there’s the willingness [from] everybody,” he said.

The proposed development, headed by architectural firm Provencher-Roy, consists of a nine-storey residential building with 272 apartments.

Its main selling point is that it’s blocks away from a future Réseau express métropolitain (REM) station.

But opposition to the project grew fast among DDO residents.

“It’s going to change the whole dynamic of the neighbourhood,” local Jorge De Matos told CTV News. “First, there’s the traffic, that the city hasn’t really addressed in my opinion.”

People living on side streets, such as Morningside, say it will be even tougher for them to turn onto St-Jean Boulevard during rush hour.

In addition, some residents take issue with the modification of bylaws that would allow for a much larger building than what the city currently permits.

Ancel says the community isn’t necessarily opposed to a residential project, but neighbours have specific concerns and feel they weren’t properly consulted.

“I’m glad that we got the numbers that we got, which means that the citizens around here got up and went and voted with their hearts, basically, on what needs to be in the area here,” Ancel said.

According to Battausci, what happens next depends on the developer. It’s a private project, he explained, and the developer may choose to walk away rather than start over.

“I think if the developer has the will to come forward with a project, a good meaningful project for the community, we welcome that, no problem. But [they] have to take the next step of meeting with the community to understand what their concerns are and were, and integrate those concerns into the project moving forward,” he said.

Ancel said she and the community are open to having these conversations.

“Residents here would be delighted to embark on a consultation was actually more of a discussion and less of a presentation,” she said.

The developer did not respond to a request for comment.

Some residents in DDO are opposing a proposed condo development they say will increase already heavy traffic in the Montreal suburb.1020×575 453 KB

Some residents in DDO are opposing a proposed condo development they say will increase already heavy traffic in the Montreal suburb.

Yeah, I’m more surprised the mayor is going for the soft-sell than heeding the will of the residents. I’m not surprised about the turnout. As I said before, I’m strongly in favour of density along our larger boulevards — including this lot — but a close friend of the family lived for 30 years on Morningside, directly facing the fence and back wall of the Goodyear shop, and it will be difficult to sell any of these owners on this project. I’m of the opinion that you can’t buy a property on the supposition that nothing will ever change around you, especially low-rise commercial buildings along busy boulevards, so while I think local SFH owners can voice an opinion, I just don’t think they should have the power to stop development. As for the rest, people on Devon and Runnymede and the back end of Morningside, that’s just the usual NIMBYism. They complain about a project along the boulevard adding to traffic woes without admitting that they are traffic. 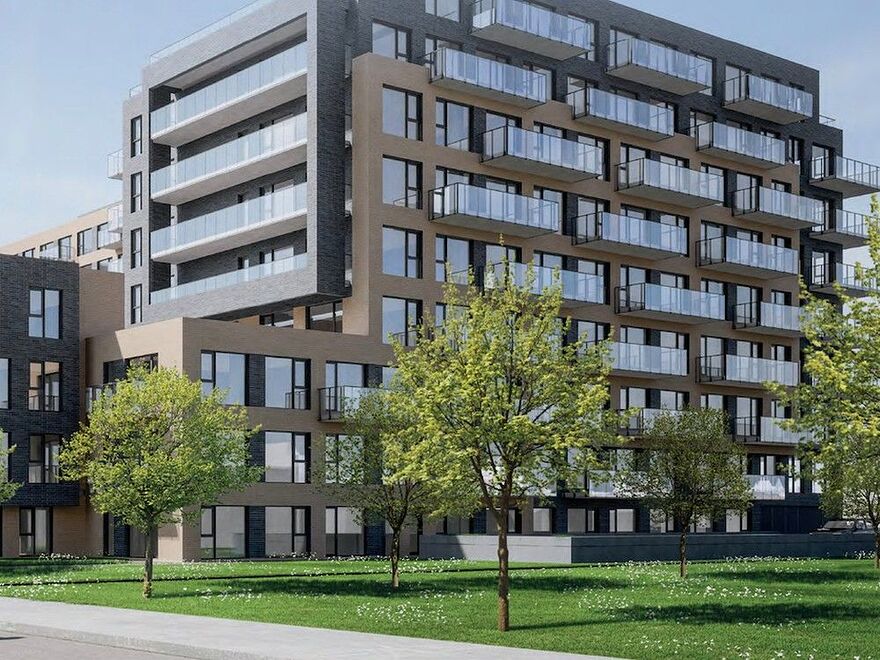 Dollard mayor says it's time to go back to the drawing board after nearly 500 residents signed public register.