I love this project. Personally I find it exactly appropriate for the neighborhood and will be a great first step for what we could hope for when the REM is complete.

If the building respects the zoning theres almost nothing the city and neighbours can do.

Since there was a consultation though, it is probably because the developpers asked for derogations to the zoning code. This means the city could refuse the project based on many different reasons and negotiate for changes.

Honestly I dont properly know all of this, so I would love for someone to correct me or add information.

You are pretty spot on but I believe that some boroughs like Pierrefonds-Roxboro have changed the process. And this project is the first one where they are using the new process. Before , their would be a public consultation on a project, after that the city gave residents 2 weeks to gather the required signatures (I believe it was less than 10% as usually 12-15 signatures suffice) to request a referendum. Getting these signatures would be enough to kill the project as referendum would be seen as too costly for the city.

But now they put up a QR code in front of the lot of the proposed project and you can simply snap it , go to the link and view the project and answer the survey. This gives the developer and the city a chance to foresee whatever resistance and opposition they might get from neighboring residents. They then can review the project before presenting it at a public consultation and with better support from the community due to the earlier input they can avoid a referendum.

So based on the comments then from the consultation, I guess we can expect the project to be scaled down? 60% of respondents had voted “highly unfavourable” to the project for traffic and size.

Pretty sure that’s why Brivia is dragging its heels with a proposal for Place Meighen. They want to go high.

Pretty sure that’s why Brivia is dragging its heels with a proposal for Place Meighen. They want to go high

Let these guys soften the blow to residents. Whatever gets built here is the MINIMUM that any of the projects will get so I hope they get the 6 they ask for. Banque Nationale and Table du Pêcheur will stand to benefit from it. Brivia can then go WILD almost.

The Brivia site is a bit different because it already has 2 nine storey buidings on that street, but yeah there will be resistance for sure regardless

and again, people just need an email to vote on the project , if 10 more people voted in favour it would change the result…

I live in the borough and grew up on the Roxboro trains, so I’ll send one in support.

I’ll ask my parents to support it. And I’ll support it cause I lived there my whole life (except the last 5 years)

I’m doing the same to my parents. Let’s turn this into a political movement!

Forum vs the Nimbys!

Haha yes ! I got my dad yesterday to support it , gonna talk to my mother and cousin tonite and try to get a couple of friends in the neighborhoud to support it as well

So the survey is still heavily “against” this proposal, how do we vote by email?

Go to vote on the first proposal (volume and height) and click “totally agree” it will ask you to open a cocorico account , follow the steps, give basic info (email addy, postal code, age & gender) it will send a login link to your email so go to that and click the link and the account will be activated. Then go back to the original page and refresh and you will be able to vote.
You will also get email notifications of all future public consultations as well

Oh yes that’s what I had already done. I thought there was a separate vote by email.

In a huge turn of events after the close of the vote: 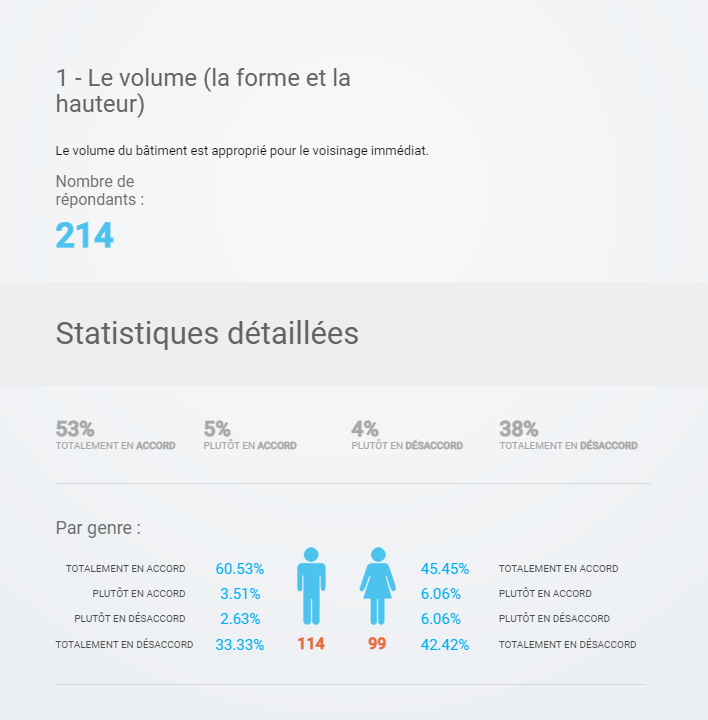